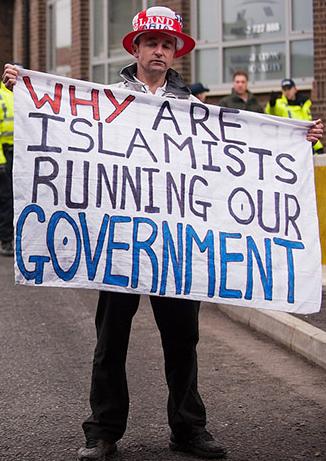 Thousands of far-right activists from the English Defence League descended on Luton yesterday for the biggest demonstration in the organisation’s 20-month history.

Coachloads of supporters from the group’s UK-wide “divisions” arrived from 10am and were joined by far right and Islamophobic groups from across Europe.

The EDL and police had predicted a turnout of between 5,000 and 7,000, but as the marchers arrived in St George’s Square in the town centre just after 1pm, it appeared that no more than 3,000 had turned out. Despite the smaller numbers there were minor scuffles at the train station as anti-racist protesters tried to prevent EDL supporters getting off trains.

More than 2,000 police officers from forces across the south of England escorted the EDL march from the station into the centre of Luton. Some fireworks and bottles were thrown, shops and businesses in the town were closed and petrol stations had been boarded up in what one resident compared to a “war zone”.

EDL leader Stephen Lennon, told the crowd they were part of a “tidal wave of patriotism” sweeping the UK. He launched a broad attack on Islam and the UK’s Muslim communities and said mainstream politicians were failing the working class.