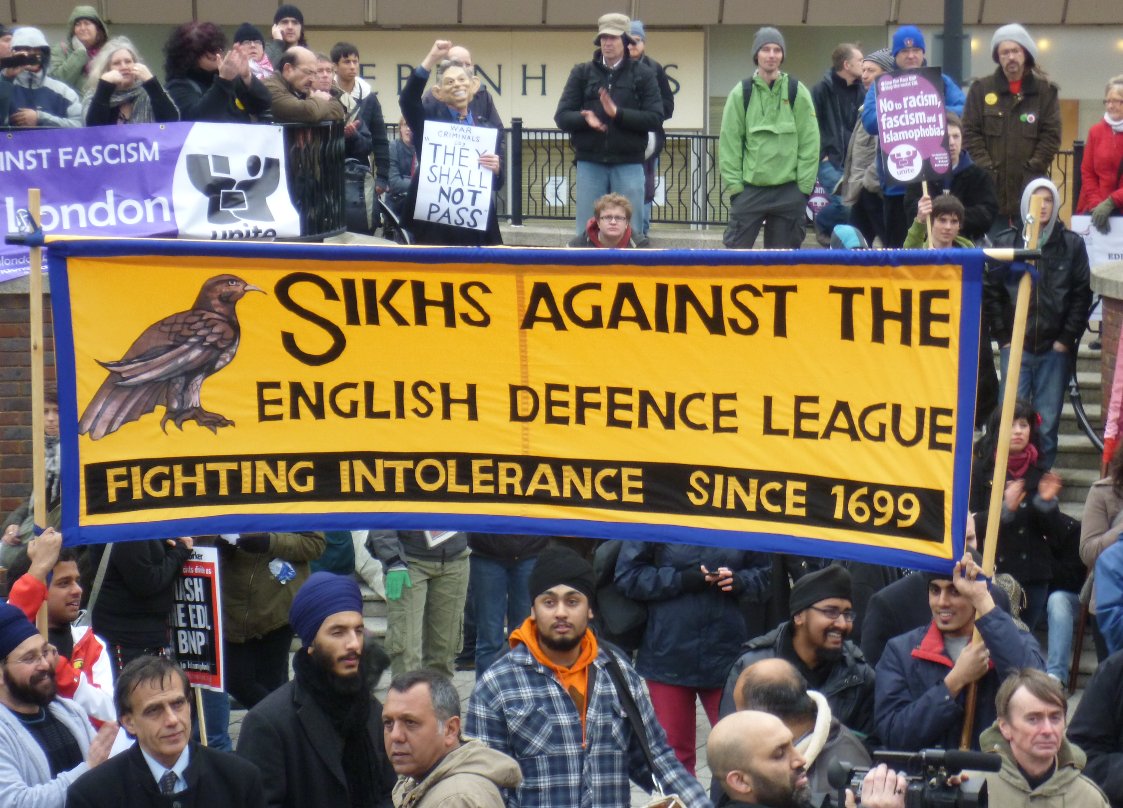 The national press has belatedly latched on to the English Defence League’s attempt to exploit a Sikh protest that took place in Luton over a month ago. The Mail on Sunday has published an extended piece on the issue (“The far-Right leader in a Sikh headscarf and a very disturbing anti-Muslim alliance: EDL joins protesters angry at ‘grooming of girls'”) and the story has also been taken up by the Daily Mirror.

In fact the 29 May protest had nothing to do with “grooming of girls” or so-called “Muslim paedophile gangs”. It was a response to an alleged assault reportedly involving a young man from the Muslim community and his partner, a young Sikh woman.

Furthermore, as the Mail and Mirror report, Sikh community leader Jaswinder Singh Nagra criticised the EDL’s attempt to hijack the protest and accused them of opportunism. Indeed, on 30 May, when the EDL tried to gatecrash a demonstration outside Luton Magistrates’ Court where the assault case was being heard, EDL co-leader Kevin Carroll was told to his face that the EDL’s support was not wanted.

One eye-witness reported: “Soon after 10.30 when I arrived it was confirmed that the Muslim lad had been charged and hearing would be in the afternoon. Kevin Carrol turned up soon after and not long afterwards community leader Jaswinder Singh Nagra. He told Carrol EDL were not welcome. When asked who had invited him to be there he could name no names. He withdrew and called Lennon. He hung around and then left.” As we pointed out, that no doubt explains why this EDL appeal was followed shortly after by this one.

The only thing the Mail‘s report adds to previous accounts is this: “A Mail on Sunday investigation has established that the leadership of the EDL has aligned itself with groups of radical Sikhs from Luton, the West Midlands and other parts of the country, who are furious that young women in their communities are, as they see it, being sexually exploited and groomed by British-Pakistani Muslims. There has been unofficial contact between Sikhs and the EDL for some time, and the links were cemented at the protest.”

The Mail asks us to believe that this attempt by the EDL leaders to build links with what are clearly unrepresentative extremists within the Sikh community distinguishes the EDL from the fascist BNP: “The EDL makes no secret that it loathes Islamism, but stresses that, unlike the British National Party, it embraces all other creeds.”

Which shows how little the authors know about the history of the BNP. After he took over the party leadership from John Tyndall in 1999 Nick Griffin implemented a “modernisation” strategy aimed at developing a more acceptable public image for the BNP, a notable feature of which was an attempt to deflect accusations of racism and fascism by attracting support from members of non-Muslim minorities such as Sikhs, Hindus and Jews on the basis of Islamophobia, just as the EDL has done.

In 2001 the Observer reported: “Racists from the British National Party have joined forces with extremists from the Sikh and Hindu communities in an anti-Islamic campaign that has been blamed for stirring up racial violence. The campaign involves the distribution of thousands of CDs, tapes and leaflets claiming that Islam poses a threat to Britain…. The campaign has been condemned by all leading Hindu and Sikh organisations.”

In 2002 Searchlight observed that “Griffin continues to court rogue figures within the Sikh and Hindu communities in a bid to isolate Muslims and portray the BNP in a more respectable light”. It noted “the release of an anti-Islam audiocassette by the BNP. Entitled Islam – A threat to us all, the tape contains speeches by Griffin, a Hindu and a Sikh”.

One particular Sikh extremist, a man named Rajinder Singh, has a long history of support for the BNP. The 2001 Observer report stated that he was proposing to set up “an Asian Friends of the BNP group to act as a supporting body and conduit for funds for people sympathetic to the party’s anti-Islamic stance”. Rajinder Singh contributed articles to the BNP newspaper Voice of Freedom and appeared in a 2004 election broadcast in which he appealed to voters to back the BNP as it was the only party resisting the Islamification of Britain.

Back in 2002 Searchlight had reported that Griffin was “contemplating ripping up the party rulebook, which at present disqualifies those without direct British or European ancestry from party membership”, quoting him as saying that he could “see a time when black and brown faces will be admitted into the BNP fold”. For the hardline racists who made up the BNP’s activist base this was taking “modernisation” too far, and Griffin was unable to secure majority support for his rule change.

However, after a court decision in 2009 declared the old BNP constitution unlawful Griffin finally got his way and the rules were changed to admit non-white members. In March 2010 Rajinder Singh was welcomed as “the first ethnic member” of the BNP and appointed “special advisor on Islamic extremism” to Griffin.

So in trying to build links with a tiny minority of extremists in the Sikh community on the basis of a common hatred of Muslims, while claiming that it can’t be a racist organisation because it has supporters in non-white minority communities, the EDL has invented nothing new. It has simply stolen its tactics from Nick Griffin. Given the EDL leaders’ past involvement in the BNP, it is hardly surprising that they should take their inspiration from this source.

Postscript:  The EDL have posted a link to the Mail on Sunday article on their Facebook page. Interestingly, the passage they select for quotation includes the statement that the EDL “has become the most significant far-Right street movement in Britain since the National Front in the Seventies”.

One EDL supporter is not entirely happy: “what happened to not being far right? I have seen Tommy Robinson on so many shows like we are not far right then you go and say you are far right? I am very confused”. To which the EDL admin replies: “That is just an extract from the article! I just added the NFSE.”

Which of course evades the point that the EDL has quoted it as if it is something to be proud of.