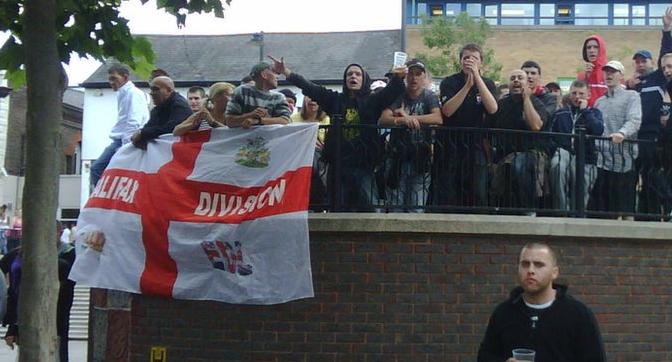 Luton Mayor Councillor Tom Shaw and council leader Hazel Simmons have said that threatening or intimidating behaviour in the town will not be tolerated after a stand off between EDL members and opposing groups yesterday afternoon.

Crowds of EDL members, in the town to support Kevin Carroll, who was in court appealing against public order offences relating to an incident at the Poachers’ homecoming parade last March, had to be separated from groups of other men by lines of police in St George’s Square. Officers from the Metropolitan Police, some on horseback, and the British Transport Police had to be drafted in to help keep the peace as angry exchanges broke out.

In a joint statement, Councillors Shaw and Simmons said: “It is not for us to comment on the decisions made in court, and it would not be appropriate for us to do so. We can say, however, that any behaviour carried out by any person to threaten, intimidate or harass others is completely unacceptable and we will not tolerate behaviour of this type in Luton.

“Luton is a diverse and vibrant town, with many people from all over the world coming together and living in harmony. The absolutely unacceptable behaviour of a small group of trouble-makers will be viewed with anger and dismay by the overwhelming majority of people in our town. We understand that most of those gathering in Luton today came from other parts of the country.

“We fully support the police in their actions to protect public safety.”

Most of the media coverage of yesterday’s events referred to “rival groups of protestors”, but what appears to have happened is that the EDL racists who had come to Luton to support Carroll staged a provocative and intimidatory demonstration in the town centre and local people understandably reacted angrily against this.