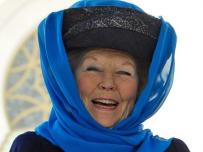 Dutch Queen Beatrix has dismissed as “nonsense” criticism of her decision to wear a head scarf during a recent visit to a mosque in the United Arab Emirates.

She was responding to questions from reporters about parliamentary questions filed by anti-Islam lawmaker Geert Wilders, who called the monarch’s decision to cover her head on a visit to a mosque in Abu Dhabi on Sunday “a sad exhibition” that “legitimizes the oppression of women.”

It is rare for the queen to respond so directly – and dismissively – to criticism from a political party in this nation where the unelected head of state’s role is largely ceremonial.