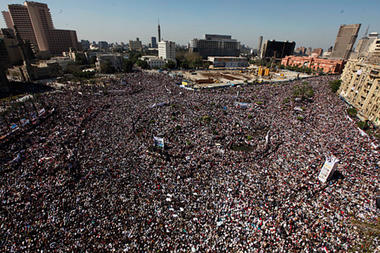 Yusuf al-Qaradawi, a leading Egyptian Islamic theologian popularized by Al Jazeera, returned to Cairo today to deliver a stirring but overtly political sermon, calling on Egyptians to preserve national unity as they press for democratic progress.

“Don’t let anyone steal this revolution from you – those hypocrites who will put on a new face that suits them,” he said, speaking to at least 200,000 who gathered for Friday prayers in Tahrir Square, the epicenter of Egypt’s uprising. “The revolution isn’t over. It has just started to build Egypt … guard your revolution.”

The massive turnout and Mr. Qaradawi’s warning that the revolution is not complete demonstrate that if the military drags its feet on reform, another uprising could begin. And while his sermon was nonsectarian and broadly political, the turnout was also a reminder that political Islam is likely to play a larger role in Egypt than it has for decades.

Waving flags under the afternoon sun, the protesters in Tahrir today vowed to press on, assembling a list of 35 demands for what they say is Part II of the revolution.

Qaradawi, a spiritual leader to the Muslim Brotherhood here, sought to reassure Egypt’s Coptic Christian minority saying “in this square sectarianism died” and praised Copts for linking hands to symbolically protect Muslims while they prayed during the uprising. “The regime planted sectarianism here … in Tahrir Muslims and Christians joined hands for a better Egypt,” said the theologian, who has lived in semi-exile in Qatar for decades.

And while he praised Egypt’s new military rulers, he warned that they must quickly restore civilian rule.

“The real message here was, ‘Don’t mess with us Egyptians,’ ” says Shadi Hamid, research director at the Brookings Institute’s Doha Center in Qatar, who joined the crowd at Tahrir today. “It’s a clear message to the military, warning them that people are still willing to come out in massive numbers and it’s going to continue indefinitely if needed.”

The devout crowd, many of whom turned out to hear Qaradawi give his first public speech since 1981, was also a reminder that huge sections of Egypt take their Islamic faith seriously – and that real and open democratic reform will almost certainly lead to a stronger role for the faith in the nation’s political life.

“Qaradawi is very much in the mainstream of Egyptian society, he’s in the religious mainstream, he’s not offering something that’s particularly distinctive or radical in the context of Egypt,” says Mr. Hamid. “He’s an Islamist and he’s part of the Brotherhood school of thought, but his appeal goes beyond the Islamist spectrum, and in that sense he’s not just an Islamist figure, he’s an Egyptian figure with a national profile.”

Qaradawi called for the immediate release of the thousands of political prisoners that remain in Egypt’s jails, an end to the feared state security services, the dissolution of the cabinet of Mubarak loyalists who have been retained by the country’s military junta, and an end to the economic blockade of the Gaza Strip.

After his speech, he read from the Quran, his voice cracking as he reached a verse on the fate of tyrants. Then the thousands settled into prayer amid a pin-drop silence before breaking out into shouts of “no to Hosni, no to his regime, no to his supporters.”

Qaradawi has often been a controversial figure in the West – he was banned from traveling to the US because of his support for attacks on US troops in Iraq, for instance – but is very much in the Sunni Islamic mainstream.

When former Monitor reporter Jill Carroll was kidnapped in Iraq in 2006, Qaradawi issued a religious ruling reiterating his position that the kidnapping and murder of civilians is sinful and called for her immediate release.