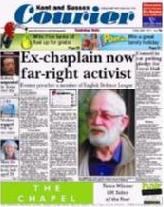 Exposure by the Courier of anti-Muslim remarks on the Facebook pages of local English Defence League activist Adrian Ratcliffe and English Democrat candidate JoJo Stanley have led to calls for a festival of cultural diversity.

Ideas centred on a fete are being backed by social housing chiefs Town and Country, which said many residents had found content on the website both “racist and upsetting”.

A spokesman said: “Residents felt that it was not a true reflection of life on the estate, which in their experience was a diverse and welcoming place to live. They wanted to counter any negative impression and felt the best way to do this would be to focus on the many positive things which make it such a friendly and inclusive place to live.”

Plans to celebrate different races and cultures on the estate include proposals for a music and dance stage, along with marquees containing various attractions and diversity themes.

Inspiration has been gained from a recent Spirit of Kindness project in which more than 20 events celebrated all the good things that Sherwood residents did for each other.

It is hoped the initiative will help soothe tensions arising in the community following the exposure of Ratcliffe last month.

The 61-year-old, who lived in Greggswood Road and was a preacher at St Philip’s Church in Sherwood, had denied he was racist but claimed he would do “whatever necessary” to fight “militant” Islam in the UK.

Nasir Jamil, president of the West Kent Muslim Association, said it welcomed efforts to improve cultural relations. He said: “We always campaign for community cohesion. We have difficulty with negative propaganda all over the world and need these type of events.”

Anyone wishing to contribute ideas or help out is invited to talks at the Robin Hood pub on Thursday, May 26 from 6pm. For more information call Brendan McGowan on 01892 523464.

Update:  Exposing… draws our attention to the fact that the EDL are threatening to attend both the organising meeting on Thursday and the festival itself.