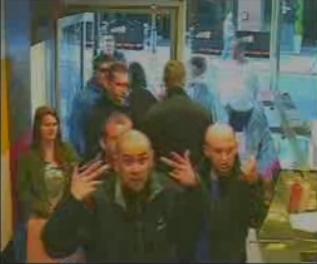 Eleven members of a drunken racist mob who terrorised two cafe workers in Carlisle are today behind bars. The senior judge at Carlisle Crown Court, Paul Batty QC, imposed sentences totalling nearly 15 years for their threatening racist behaviour which he described as “feral” and “disgraceful”.

One of the longest jail terms – 18 months – was imposed on 33-year-old former soldier Andrew Ryan, who played a leading role in the abuse.

The group targeted the Manhattan Cafe, on Botchergate, at the end a drinking session last May when they celebrated Ryan’s release from jail for another racist offence. He had served a 70-day term for burning a copy of the Koran holy book, stolen from Carlisle Library, in the city centre.

Before he passed sentence, Judge Batty commented on CCTV images which showed the gang abusing two Turkish workers at the Manhattan Cafe and he issued a stern warning to others contemplating racist violence. He told the defendants:

“You were acting as a vain racist mob, shrieking and shouting racist abuse for no reason whatsoever. You were fuelled by drink and it is perfectly clear from your demeanour as shown by the CCTV that you were completely and utterly out of control and you humiliated those Turkish men who were performing a public duty in that takeaway outlet, screaming at them, terrorising them.

Earlier, the courtroom had fallen silent as the prosecution played the video recording of the incident, shortly before 8pm on May 20 last year. The gang are seen massing outside the takeaway, several of them gesticulating wildly as they yelled obscene and racist abuse at the workers.

Judge Batty described the images as “profoundly depressing”, but he pointed out that other members of the public had come forward to help the two victims, prompting the judge to add: “Those individuals all in the dock stand out as a beacon of racism. But as for the rest of Carlisle one can not say that at all.”

Tim Evans, prosecuting, said there was clearly a racist element at the heart of what had happened, saying the group were motivated by a belief that the two Turkish men at the cafe were from Pakistan.

The defendants claimed they targeted the cafe because they had heard a takeaway in the Botchergate area – identified in court as the Spice of India – was at the centre of an investigation of the sexual grooming of girls. The suggestion that Manhattan Cafe staff were in any way linked to that investigation was entirely mistaken, Mr Evans told the court.

The barrister said: “The profound ignorance of racism is, of course, not to look beyond the colour of an individual’s skin. Here, that ignorance is plain for all to see, not least because the complainants are not even Pakistani or even from the Indian subcontinent.”

The court heard how the person who started the abuse was Louise Leslie, a 41-year-old mum-of-two. She arrived at the takeaway and started the shouting and gesturing at the two workers who were inside. She abused the two men for some minutes before finally being ushered away, with the parting comment: “You’ll never beat Carlisle chicks.”

The second person to stride into the cafe is Andrew Ryan, joined quickly by Donna-Marie Beattie, 23, and then by Ian Bradshaw, 26, Michael Wilson, 29, Craig Metcalfe, 31 and then Ryan’s younger brother Matthew, 27.

Mr Evans said of Andrew Ryan: “Ryan stood at the cafe door, angry, eyes bulging, shouting and pointing, apparently egging the others on. He is the most active, shouting and gesturing before the group enter the cafe.”

In the minutes that follow, they are joined by William Ewings, 43 and Wilson, who throws a chair. At one point, Bradshaw is seen flicking a lighted cigarette into the shop and throwing a fizzy drinks can.

One of the Turkish cafe workers told police the racist abuse had been going on for weeks, involving Louise Leslie and Kerry Wilson. The May 20 incident was the culmination of four weeks of abuse.

On June 8, Michael Wilson returned to the shop and again shouted abuse, threatening violence and telling the Turkish men to “get back” to their country. Both workers were left shaken and distressed by the two incidents.

David Thompson, for Andrew Ryan, of Marina Crescent, Currock, said he wanted to apologise for his behaviour. On the night he had drunk five or six lagers and the alcohol impaired his judgement, said the barrister. Mr Thompson said the Koran incident was a protest aimed at Muslim extremists.

Michael Wilson, 29, of Cant Crescent, Upperby, was jailed for 30 months.

His barrister said his life since the age of 13 had been affected by an addiction to alcohol. Having lost his home and contact with his child, he was now at rock bottom.

Ian Bradshaw, of Harrison Street, Currock, was jailed for 21 months. His barrister said he now accepted that his behaviour had been disgraceful and he apologised.

William Ewings, of Gilford Crescent, Harraby,was jailed for 13 months. He was said to be remorseful and “disgusted” at his behaviour.

Louise Annette Leslie, of Buchanan Road, Currock, was jailed for 15 months. Her barrister said she had an excellent work record.

Also jailed for 15 months was Donna-Marie Beattie, 22, of Sybil Street, Carlisle, whose barrister said she was ashamed of her actions.

Leslie’s twin sister Kerry Victoria Wilson, 41, of Ridley Road, Currock, who did not use racist language but joined in by banging on the takeaway window, was jailed for a year.

The court heard that Matthew Ryan, who lives with his brother Andrew in Currock, suffered mental health problems and was easily led. He was jailed for 10 months.

Craig William Metcalfe, 31, of Gilsland Road, Durranhill,was jailed for 15 months. He deeply regretted his actions, his barrister told the judge.

Tracie Wilkinson, 35, of Levens Drive, Morton, said to be an alcoholic, was jailed for 15 months, while Rebecca Louise Wardle, 24, of Eden Park Crescent, Botcherby, was jailed for 13 months. Her barrister said she had been very drunk.

The video of the attack (without sound) can be viewed here