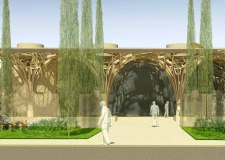 Critics of the planned Cambridge mosque had plenty of opportunities to raise objections before plans were submitted, the Cambridge Muslim Council (CMC) has pointed out.

Leaflets posted through doors in Mill Road claim the new mosque’s dome dominates the skyline. It also states the ‘megamosque’ will cause traffic chaos.

CMC said public views were initially gauged three years ago before the plans were drawn up. This summer three sets of architects drawings were put before the public and one was chosen, based on public consensus.

Mirza Baig, vice-chairman of the CMC, said both times people had the opportunity to raise objections. Nevertheless, he added: “If their objection is just on the dome then it is something that can be discussed, although the dome is visible only from the air, but the problem starts when they say the mosque is not required. It is.” He added the dome would not dominate the skyline.

Sarah Elgazzar, spokeswoman for the Cambridge Muslim Trust, said: “We are happy to get feedback. We would rather they told us who they are so we can discuss the concerns with them. The problem with the leaflets is there is no contact and there are inaccuracies such as the mosque will cater for 3,000 people. It will not. They are leading people up the garden path.”

Mr Baig said the team went to great lengths to make sure the building was in keeping with the area, adding a grassed roof at an additional £1 million cost. “There were objections about the extra cost, but we wanted to make the building not too obvious,” he said. “We took people’s views into consideration and have tried to make sure it is in keeping with the area and what people want.”

The mosque will be built at the site of the former Robert Sayle warehouse and will provide a place of worship for Muslims who currently use two mosques in Mill Road. “At the moment there are two big mosques in Mill Road and they create parking problems,” said Mr Baig. “We want to sort that by making a purpose-built mosque. Far from creating problems, it will address them.”