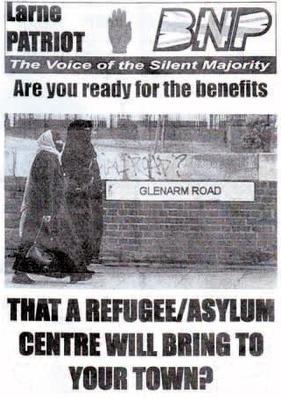 The BNP has taken its race hate message to Larne. Skinhead members of Nick Griffin’s far-right party spent the last week leafleting homes in the Co Antrim seaside town. They put scaremongering mail through doors warning about a new asylum seeker centre which is being built in Larne.

The BNP news-sheet includes a fake picture of two Muslim women dressed in burkas walking down the Glenarm Road. The leaftlet states: “The good folk of Larne do not want their town being used as a dumping ground, holding centre, or whatever name the liberal elite wish to call it. No matter how much sugar coating is applied to this foul tasting proposal, the Ulster BNP … will not have the wool pulled over their eyes.”

But what the BNP leaflet does not say is that the asylum centre is being built inside the local PSNI station. The 25 immigrants held there ahead of deportation will not be able to leave the complex. They will not be allowed enter the town and will be shielded from public view.

Larne Mayor Bobby McKee accused the BNP of whipping up racial tension. He said: “I wouldn’t give these BNP people the time of day. They held a protest at a council meeting at the beginning of September and only 10 people showed up. They have no support.”

Bobby explained that the majority of refugees who will be held at the new detention centre will be children. “They will be held within the grounds of the PSNI station before being deported. It’s not like they will be running the streets,” he added. “Instead of moaning the BNP should recognise the contribution refugees have made to society. They come to Northern Ireland and gladly do the jobs no-one else will do. You’ve got to give them credit for that, they are only trying to escape poverty.”

The BNP Larne leaflet drop was the brainchild of its new Northern Ireland organiser Steve Moore – who was born in the town. On the BNP’s website, Moore said: “Local people are horrified by this news that their town has been earmarked as a dumping ground for illegal immigrants and bogus asylum seekers.

“We have seen that it is almost impossible to deport anyone from our country because of the insane Human Rights Act. Larne will undoubtedly become home to these economic migrants.”

Regarding the BNP’s new organiser the current issue of Searchlight reports:

“When Moore isn’t posting videos by white power bands such as Skrewdriver on Facebook, he reveals his fancy for all things ‘Third Reich’ by sharing videos of Adolf Hitler with his online friends. One apparent favourite is entitled: ‘Why the world cannot forget Adolf Hitler’. He also has a penchant for songs and videos of the German Wehrmacht. Elsewhere, Moore has thrown his energies into trying to stop a mosque allegedly being built in Ballymena, the heartland of Paisleyism. Like most BNP members, Moore calls Muslims ‘ragheads’ and Catholics ‘taigs’.”