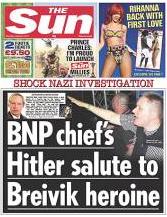 Nazi thug Chris Hurst was booted out of the BNP yesterday after The Sun told how he gave Hitler salutes at a fascist rally. But incredibly, the far-right party tried to play down his shameful behaviour by spouting more racist bile.

Spokesman Simon Darby said: “He has been silly but he has not been caught dealing drugs or prostituting with underage girls, like some in the Islamic community.”