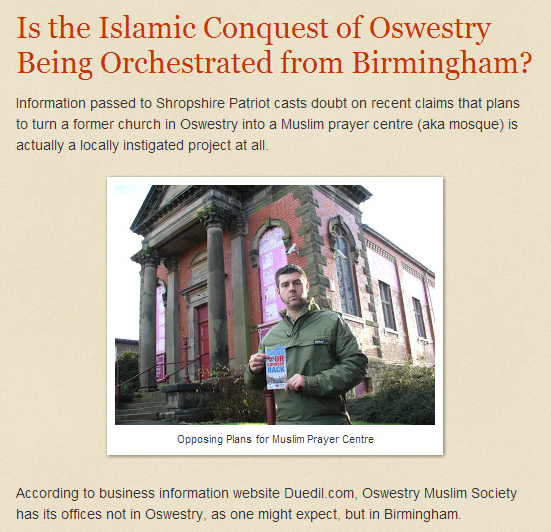 An example of British National Party propaganda against the centre

Controversial plans for Oswestry’s first Muslim centre have been given the go-ahead. It will be sited in a 19th century former Presbyterian church.

The bid to change the church in Oswald Road, into a Muslim prayer centre sparked more than 70 objections and led to the town being targeted in a leafleting campaign by the British National Party.

But more than 40 people wrote in support of the bid by Oswestry Muslim Society and permission was given by Shropshire Council planning officers under delegated powers.

Planning officers revealed today that some of the objectors’ views had not been placed on the council planning website where the public’s representations can normally be viewed as they were of a “sensitive and potentially provocative nature”.

A planning report said: “There have been a substantial number of representations received both in support of (41) and objection to (72) the proposal. Many of these relate either entirely or primarily to the race and/or religion of the applicants and individual perceptions about the potential influence on both the local and wider community. These matters are not material planning considerations and should not play any part in the determination of the application.”

It said the bid was approved as the proposed use was appropriate for the building and would not have an adverse impact on the area.