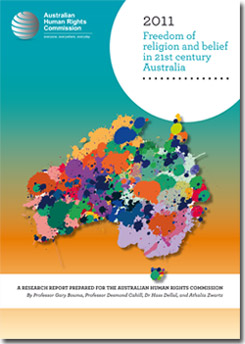 A year-long study of religious freedom in Australia has revealed widespread distrust of Muslims and discrimination against pagans and homosexuals. The report released Monday by the Australian Human Rights Commission found that acceptance of religious difference had not become easier as the population became more diverse.

After taking more than 2,000 public submissions and consulting with more than 200 religious, secular and community groups, the report found there was a “pressing need” for education about religions to reduce ignorance and fear.

“There is a current of anti-Muslim discourse that suggests an entrenched hostility often related to overseas events,” the report said in its conclusion. “Significant distrust of Muslims and Islam was expressed by some,” it added, saying there were reports of discrimination against Muslims and other religious minorities.

The report entitled “Freedom of religion and belief in 21st century Australia” found a greater recognition of spiritual communities in Australia, such as pagan and indigenous beliefs, was needed. It noted that people keeping nature-based spiritual pagan traditions reported high levels of prejudice, discrimination and a lack of recognition of their beliefs.

“The research process also uncovered some prejudice and hostility toward gay people, and also significant concern was expressed regarding employing gay people, particularly in faith-based schools,” it said.

According to the latest national census of 2006, Christians make up 63.9 percent of the Australian population, followed by Buddhists (2.1 percent), Muslims (1.7 percent), Hindus (0.7 percent) and Jews (0.4 percent). Some 18.7 percent said they had no religion and 11.2 percent did not state a faith.