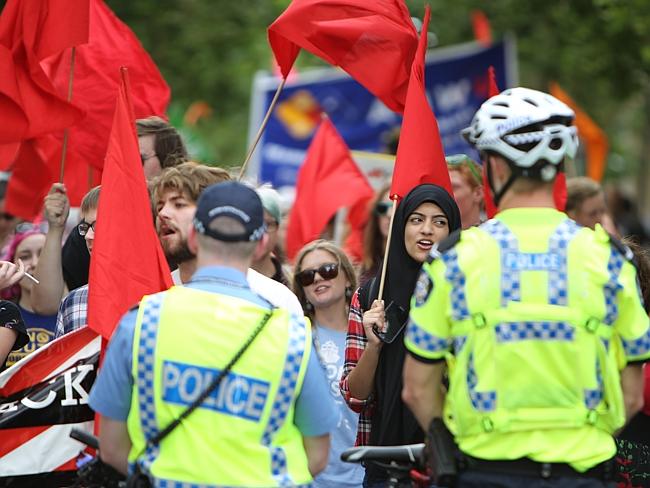 A peaceful anti-Islamophobia rally in Perth has been confronted by counter-protesters, some wearing masks and waving the Australian flag.

The group of about 20 people, who denied they were members of the far-right Australian Defence League, singled out controversial Perth Muslim preacher Junaid Thorne. They held anti-Islamic banners and chanted “Junaid Thorne, terrorist scum”, “Aussie, Aussie, Aussie” and “this is Australia for Australians”.

Mr Thorne, a self-declared Sheik, said: “You can tell from the language these people use they are uneducated bogans.” The 25-year-old, who has gained national attention for his lectures, said he was showing his support for a “united community”. He would not answer questions about Islamic State terrorists and said his social media posts were just commentary, adding: “Everyone is entitled to their opinion.”

Most of the counter-protesters, some of whom wore Australian flag bandannas and T-shirts emblazoned with ‘This is Australia”, refused to speak to The Sunday Times. One of the group, Wayne White, 55, said: “We want to see Australia stay as Australia, what our forefathers fought for. We are just guys that are scared about the way our country is going. If they bring in Sharia Law we would be finished.”

Islamic Council of WA president Rateb Jneid, who spoke at the rally, said the ADL and “Islamic-critical movement” the Q Society of Australia should be banned. “People like them should not be allowed to do any activities. They are the ones who are making the problems in Australia,” Dr Jneid said.

Dr Jneid criticised last month’s counter-terrorism raids in the eastern states and said the Abbott Government’s stance was fuelling hate towards Australian Muslims. “But the truth always prevails. This rally is a beacon of light telling the Government that we do not accept their vilification of Muslims,” he said.