A measure of the irrationality and hysteria of Islamophobes is their readiness to accept even the most ludicrous anti-Muslim story as genuine, when just a moment’s intelligent thought would lead to the conclusion that it is obvious nonsense.

As long as it fits with their own mindless prejudices, right-wing extremists happily post and repost transparently false Islamophobic propaganda on social media without the slightest attempt to check whether it has any basis in fact.

Here, for example, is a recent post from the popular far-right Facebook page, the New Daily Patriot. 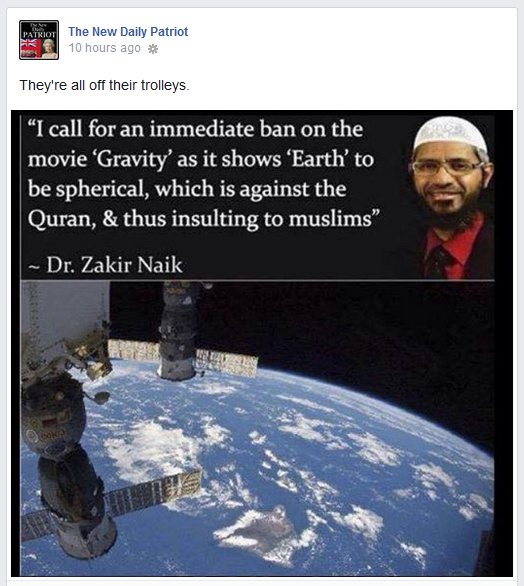 Predictably, this provoked the usual outburst of abuse and threats, not just against Dr Naik but against the entire Muslim community, ranging from “fuck off to your flat planet then cause you lot are fucking not human and how long do you fuckers think we are going to put up with your bullshit”, to “shoot the cunts” and “can’t we just kill them all”.

The story that Zakir Naik wants to ban the film Gravity is of course a hoax. Dating from last year, it is based on a tweet from a fake twitter account set up in Dr Naik’s name.

It’s easy to mock the ignorant drivel promoted by the New Daily Patriot. But their Facebook page has over 35,000 likes. The repeated posting of bogus anti-Muslim stories like this serves to whip up their numerous racist supporters into a frenzy of Islamophobic hatred that has consequences in the real world.