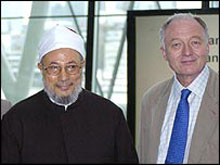 “Sheikh Yusuf Qaradawi, the Egyptian-born octogenarian embraced by Ken Livingstone in 2004 and, as of 2008, excluded from the UK as a preacher of hate, has recently published a two-volume book entitled The Jurisprudence of Jihad. It is over 1400 pages long and has been received enthusiastically, and with some justification, as a major intervention on the subject by one of Islam’s most respected ‘modernist’ figures.

“‘Jihad’, much like ‘fatwa’, is a term that carries some heavy baggage. In the west, jihad now conjures up images of suicide bombers and implacable violence. Non-Muslims tend to equate this so-called ‘pinnacle’ of Islam with abject evil. The lack of mutual understanding, trust and respect between ‘Islam’ and the ‘west’ is a problem many – not just President Obama – recognise….

“Qaradawi’s views on jihad are already relatively well known and, in the Arab context, mainstream: Palestinians have the right to pursue jihad in self-defence against Israel, as do Iraqis against Americans. More controversially, this right extends to the use of suicide bombing. But al-Qa’ida’s global jihad is definitely out, as is the targeting of civilians or the use of violence not sanctioned by the state.

“Instead Qaradawi encourages a ‘middle way’ conception of jihad: ‘solidarity’ with the Palestinians and others on the front line, rather than violence, is an obligatory form of jihad. Financial jihad, which corresponds with the obligation of alms giving (zakat), counts as well. And Muslims should recognise that technological change means that media and information systems are as much a part of the jihadist repertoire as are guns. Indeed, as long as Muslims are free to use media and other resources to press their case, there is no justification for using force to ‘open’ countries for Islam.”