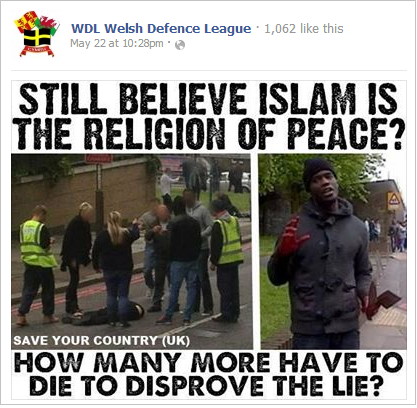 Young Muslims in Wales say they fear a backlash after the barbaric killing of Drummer Lee Rigby in London. Charity Faith Matters said it is looking at claims a young woman was spat at in an incident in the Cardiff area and said it was dealing with a significant rise in the number of anti-Muslim incidents in Britain as a result of the attack in Woolwich.

Meanwhile, hateful messages have been posted on social media websites. The Welsh Defence League’s Facebook page boasted a picture of the aftermath of the shocking murder with the message: “Still believe Islam is the religion of peace? How many more have to die to disprove the lie?” It comes after bacon was left outside a Cardiff mosque the day after Drummer Rigby was hacked to death.

Other incidents across the UK have seen a mosque in Kent attacked, while in Essex a man walked into a temple brandishing a knife and a burning bottle was hurled at an Islamic centre in Bletchley. Young Muslims in Wales have now told how they fear a rising tide of hostility will engulf them following 25-year-old Drumer Rigby’s murder.