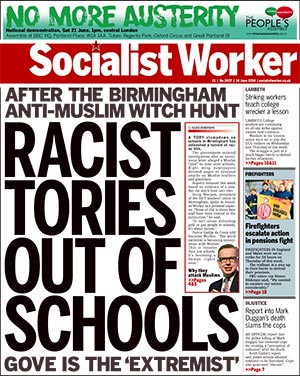 A Tory clampdown on schools in Birmingham has unleashed a torrent of racist filth.

The government ordered investigations after an anonymous letter alleged a Muslim “plot” to take over schools. Right wing newspapers devoted pages to personal attacks on Muslim teachers and governors.

Reports released this week found no evidence of a plot. But the witch hunt isn’t over.

Doug Morgan, president of the NUT teachers’ union in Birmingham, spoke to Socialist Worker in a personal capacity. “None of this is about how staff have been treated or the curriculum,” he said. “It isn’t about defending girls or gay people in schools. It’s about racism.”