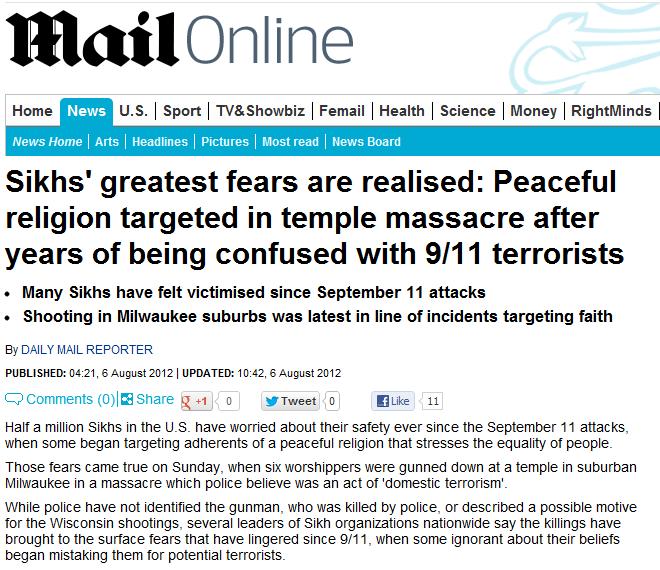 Initial reactions to the appalling violence at the Sikh Temple of Wisconsin prominently featured the suggestion that Sikhs had been confused with Muslims by the killer and had suffered “collateral damage” from 9/11. On the face of it, that appeared to be a plausible explanation, as Sikhs in the United States have certainly been attacked by ignorant racists who can’t tell one predominantly non-white faith community from another.

The obvious conclusion is that Sikhs and Muslims should join together to oppose Islamophobia. The right-wing response, however, is to try and set the two communities against each other by suggesting that whereas hostility towards Islam is legitimate and a significant number of Muslims are indeed violent extremists, Sikhs are unfairly tarred with the same brush.

Take for example the article in yesterday’s Daily Mail, which states that Sikhs in Wisconsin were targeted despite the fact that they are “adherents of a peaceful religion that stresses the equality of people”. Unlike Muslims, is the implied subtext.

Sikhism is of course a peaceful religion just like any other, in the sense that this is how the overwhelming majority of its followers interpret their beliefs. However, as with all faiths, Sikhism has its extremist minority who carry out acts of terrorist violence – hence the assassination of Indira Gandhi and the attacks on Hindu civilians by Khalistani militants in the 1980s. Sikhs are no more peaceful, or violent, than Muslims, Christians or Jews are.

As it turns out, it seems unlikely that Wade Michael Page, the gunman responsible for the Wisconsin killings, would have regarded Sikhs as any less of an enemy than Muslims. The Southern Poverty Law Center has revealed that Page had longstanding white power links going back to 2000, when he was involved with the neo-Nazi National Alliance. He played in a racist rock band called Definite Hate, whose album “Violent Victory” featured a drawing of a disembodied white arm punching a black man in the face.

There are some bigots who find it convenient to hide their racism behind the claim that they are solely concerned with the supposed threat posed by Islam (which, as they never cease to remind us, is a religion not a race) and that they have nothing against other, non-Muslim minorities. Neo-Nazis generally don’t bother – they just hate people whose skin isn’t white and make no attempt to pretend otherwise. Minority communities have a common interest in resisting both sorts of racism.

See also Sheila Musaji, “The terrorist attack on the Sikh Temple must be a wake up call”, The American Muslim, 6 August 2012