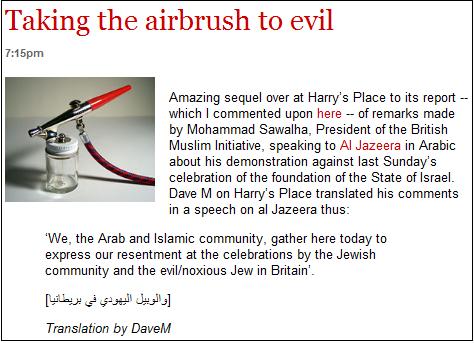 In his Diary column in the Independent earlier this week Matthew Norman outlined the background to Mohammad Sawalha’s successful libel action against the Spectator and Melanie Phillips:

In July 2008, Mad Mel lifted and embellished a mistake from the neocon website, Harry’s Place, regarding Mohammad Sawalha, a Palestinian-born British man whom Al Jazeera had mis-transcribed referring to “evil/noxious” Jews at a rally. In fact, as Arabic experts later confirmed to High Court superstar Tugendhat, he referred to the “Jewish lobby”. Al Jazeera corrected it instantly, and Harry’s Place later, yet MM magisterially ignored requests for a simple correction until a trial was imminent, when she caved. This unwonted arrogance has presented a six-figure bill for damages and costs to The Spectator, which at the time of writing continues to host her deliciously deranged blog.

Given their responsibility for getting Mel and the Speccie into this mess, it would seem only reasonable that Harry’s Place should make a substantial contribution to the payment of Mohammad Sawalha’s costs and damages. Can we take it that the chaps will be organising a whip-round?