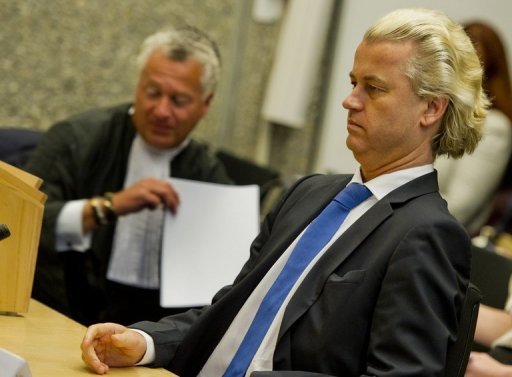 The trial of Geert Wilders is nearly over. On Thursday, the three Amsterdam district court judges conducting the trial will announce their verdict. It is widely expected that Mr Wilders will be acquitted on all the charges facing him.

If that is the case, the 29-month legal struggle which saw one of the country’s most popular and influential politicians accused of hate-mongering will come to an end.

It started back in January 2009 when justices of the Amsterdam court ordered the public prosecutor to bring charges against Mr Wilders of inciting hatred and discrimination, based on a number of his anti-Islamic statements published in the national media, as well as Mr Wilders’ film, Fitna.

One moment during the dozens of courtroom sessions encapsulated what, for many, the trial was supposed to be about. Twenty-four-year-old law student Naoual Abaida, daughter of a Moroccan immigrant, stood in the courtroom not two metres from Geert Wilders. She was allowed to speak as one of the “injured parties”; one of the people who had initially petitioned the Justice Ministry to prosecute Geert Wilders.

Looking into his eyes she said his “insulting, polarising and provocative language has set the tone for a country becoming increasingly intolerant”.

But for Mr Wilders and his high-profile defence lawyer, Bram Moszkowicz, the trial has been about free speech. To them, Mr Wilders is being persecuted for expressing his opinion. They have persuaded much of the Dutch public that this is what the trial is really about.

The idea that Wilders is a defender of free speech is of course laughable. This is a man who is notorious for proposing that the Qur’an should be banned. He and the PVV also have a record of demanding the suppression of criticisms aimed at Wilders or his party. For Wilders, free speech is a principle that applies to himself, but not to Muslims or to his political opponents.