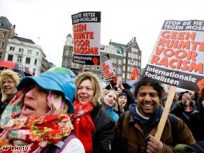 The anti-Islam Dutch politician Geert Wilders on Thursday released on the Internet his highly charged and much-anticipated anti-Koran film, which matches graphic images of terrorist attacks and death threats against Jews by Muslim extremists with verses of the Muslim holy book.

The 15-minute film – titled “Fitna”, Arabic for civil strife – features news images of beheadings, violence against women in the Islamic world, anti-Semitic tirades by imams and the aftermath of terrorist attacks in New York and Madrid, including the charred remains of some victims. Those film clips of violence are alternated with images of verses of the Koran, which Mr. Wilders claims inspires such acts.

Mr. Wilders, a member of the Dutch Parliament and the leader of an anti-Islam political party, said his intention with the film was to warn the West about a religion he viewed as dangerous and intolerant and to stop what he called the Islamization of the Netherlands and other Western societies.

Prime Minister Jan Peter Balkenende of the Netherlands renounced Mr. Wilders’s film and his vision with a statement he read at a news conference after the film was released. “The film equates Islam with violence: we reject that interpretation,” he said at the news conference in The Hague. “We believe it serves no purpose other than to offend.”

Mr. Wilders told reporters after his film’s release that “Islam and the Koran are dangers to the preservation of freedom in the Netherlands in the long term, and I have to warn people of that.”