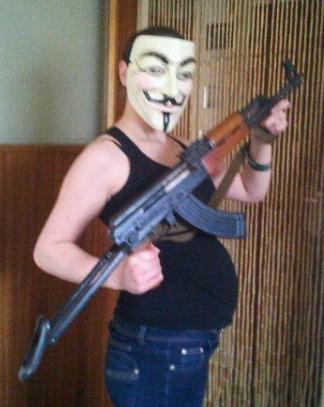 The question is posed by Ted Jeory in the Sunday Express. The English Defence League member in question is one Toni Macleod, who claims she has now in fact left the EDL, though reportedly this is only because she’s joined the overtly neo-Nazi breakaway group the Infidels.

Thirty-five weeks pregnant, Macleod has been told by Durham County Council social services that she would pose a “risk of significant harm” to her baby and they want to put the child up for adoption. According Jeory, this is because they “fear the child would become radicalised with EDL views”.

The source of this bogus story is Lib Dem MP John Hemming, who has even raised Macleod’s case in the Commons. He has a post on his blog in which he uncritically repeats her assurance that she is “not racially prejudiced” and “has many friends who are Muslims and Sikhs”. Hemming claims that the unfortunate Macleod has fallen victim to the “thought police” and argues “I do not think association with the EDL is good cause to remove a new born child from a mother”.

As the Express reports: “He contrasts her treatment with that of the extremist Islamic cleric Abu Qatada, who was allowed to remain with his children when he was briefly remanded on bail earlier this year as the Government tries to deport him.”

Hemming is quoted by Jeory as saying: “It raises a curious question as to why Abu Qatada is allowed to radicalise his children but the state won’t take the chance of allowing Toni McLeod to look after her baby in case she says something social workers won’t like.”

Read beyond the shock-horror headline and misleading introduction, however, and a rather different picture emerges of the reasons why social services might think that Macleod is an unfit mother:

The 25-year-old has a string of convictions for violence, including butting and biting a police officer after an EDL march in 2010 and she has been banned from owning dogs after setting a pit bull on a former partner…. Last month, a judge ruled that her three other children, who have different fathers, should be permanently removed from her care…. Documents seen by the Sunday Express reveal social workers are worried about Mrs McLeod’s previous alcohol and drug misuse, her “aggressive behaviour” and her alleged “mental health issues”.

Before she married her husband Martyn, Toni Macleod was known as Stella Evans. You can read a report of her arrest at the November 2010 EDL protest in Preston, and details of her conviction for setting dogs on her former partner, here. When social services took the view that Macleod posed a risk of harm to her child, the issue of her EDL opinions was clearly well outweighed by her record of violent criminality, along with a history of substance abuse and behavioural and psychological problems. Presumably this explains why her other children have already been taken away from her. To draw a parallel with the case of Abu Qatada – who of course has not been convicted of a single offence, terrorist or otherwise, in the UK – is just absurd.

Under normal circumstances, the Express would no doubt portray Hemming as a naive liberal who is willing to put a baby in potential danger by whitewashing its mother’s record. But because he has raised the issue of supposed double standards, claiming that a foreign Muslim terrorist suspect has been given favourable treatment compared with that accorded to a white non-Muslim UK citizen, the Express took a different line. And Jeory, with his extensive experience of Islamophobic journalism, was just the man for the job.

As for Hemming, he says that he is opposed to the EDL. In which case you can only conclude that the explanation for his behaviour is that he is a total idiot. Because his misrepresentation of Macleod’s case has played directly into the EDL’s hands, providing this gang of racist thugs with an excuse to rerun their paranoid nonsense about the so-called “two-tier” justice system in the UK. 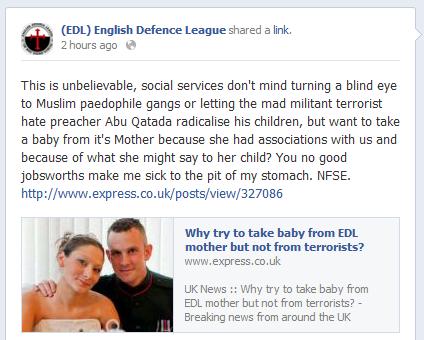 You can read a selection of the comments from the EDL’s Facebook page here.

The liberal/left have implemented the wholly unnatural act of diluting the cohesive native population with an imported population which comes from a society completely at odds with the religion, tradition and culture of Great Britain. This alien society is then actively encouraged to retain its barbaric culture rather than assimilate. Not content with simply causing social division and religious terrorism, the liberal/left then engage in persecuting and criminalising any member of the native population who dares question their perverse and treacherous ideology.

Of course, Jeory himself wouldn’t subscribe to this sort of raving anti-Muslim bigotry. He just provides ammunition for the people who do.

Update 3:  In response to complaints about the treatment of Ms Macleod, Durham County Council has stated: “We have been contacted by a number of groups and individuals following national publicity surrounding Toni McLeod. Durham County Council will not comment on the confidential circumstances of any case, however we would like to reassure you that, contrary to what may be suggested, we would never consider removing a child from their family on the basis of their parents’ political beliefs or occupation.”