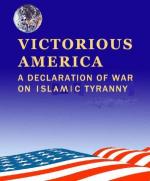 David Yerushalmi of the Society of Americans for National Existence (yes, that does produce the laughably inappropriate acronym SANE) explains why there are no moderate Muslims and why “Muslim Reformers” like Ayaan Hirsi Ali should be supported instead:

“The mythical ‘moderate’ Muslim … the Muslim who embraces traditional Islam but wants a peaceful coexistence with the West, is effectively non-existent … because he chooses to remain within traditional Shari’a-based Islam, where the Ulamā or Islamic legal scholars, and the Muftoon (singular: Mufti) who issue fatawa (singular: fatwa) or legal edicts, reign supreme together with the lesser mullahs, imams, and maulvis. A ‘moderate’ among these men will simply be shouted down, coerced into silence, or murdered. In contrast, the Muslim Reformer takes the proper position that Islam as it was created, as it has existed for 1,300 years, and as it exists now, is an evil political ideology the goal of which is a worldwide Islamic Caliphate.”