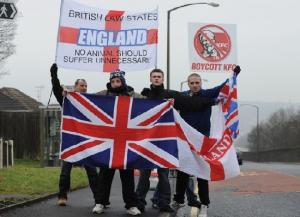 For twenty-eight days members of the English Defence League are protesting outside a KFC. The protest is against the serving of Halal meat at the Blackburn store based on Haslingdon Road.

Things began with the predictable gusto on February 20. But trying to link the serving of halal food to “Islamification” was never going to be easy. In what way does halal food mean that a country was being Islamified? Why not also demonstrate against the serving of Kosher meat? Was halal food really impacting how people eat? And why only pick on KFC? Meat being served at other restaurants and takeaways across the region is halal. Should it really matter?

A specific reason given by the group is that it is inhumane to kill an animal the halal way. But these particular chickens are stunned before they are killed. KFC adheres to its strict laws and regulations as it did before the food became halal. Some would claim the slaughter of KFC chickens is done in a more humane way that the meat sold in your average supermarket!

Within days the Facebook page was asking for more demonstrators. By February 28 things had become a little desperate. A message read, “Tonight the turn out at the KFC was pathetic! All the so-called members of the Blackburn division and we have six stood up there! We need to sort this out!”

KFC meanwhile have handled the situation as diplomatically as possible. The company already came under fire from the Halal Monitoring Committee (HMC) for its use of stunning so to have a daily protest on its doorstep because you are too halal must be annoying to say the least.