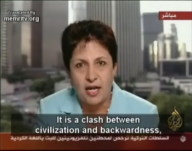 The West was still underestimating the evil of Islam, an influential Muslim thinker has warned.

On a two-week “under the radar” visit to Australia, Syrian-born Wafa Sultan secretly met both sides of federal politics and Jewish community leaders, warning them that all Muslims needed to be closely monitored in the West. She insisted that Australia and the US have been duped into believing there is a difference between the religion’s moderate and radical interpretations.

In an interview with The Australian, Dr Sultan – who shot to recognition last year following an interview on al-Jazeera television in which she attacked Islam and the prophet Mohammed – said Muslims were “brainwashed” from an early age to believe Western values were evil and that the world would one day come under the control of Sharia law.

The US-based psychiatrist – who has two fatwas (religious rulings) issued against her to be killed – warned that Muslims would continue to exploit freedom of speech in the West to spread their “hate” and attack their adopted countries, until the Western mind grasped the magnitude of the Islamic threat.

“You’re fighting someone who is willing to die,” Dr Sultan told The Australian in an Arabic and English interview. “So you have to understand this mentality and find ways to face it. (As a Muslim) your mission on this earth is to fight for Islam and to kill or to be killed. You’re here for only a short life and once you kill a kafir, or a non-believer, soon you’re going to be united with your God.”

Private security was hired for Dr Sultan, who left Australia yesterday, and state police authorities were also made aware of her movements in the country. The organisers of her visit asked the media to not publish anything about her stay until she had left the country because of security-related concerns.

Dr Sultan said Islam was a “political ideology” that was wrongly perceived to have a moderate and hardline following. “That’s why the West has to monitor the majority of Muslims because you don’t know when they’re ready to be activated. Because they share the same basic belief, that’s the problem,” said the 50-year-old, who was last year featured in Time magazine’s list of the 100 most influential people in the world.