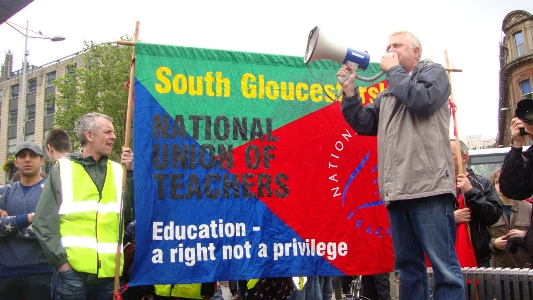 Trades unions and protesters have called on a Bristol City Council cabinet member to withdraw his claim that the Labour mayor candidate was “weak and naive” in his handling of the English Defence League (EDL) march earlier this month.

Gary Hopkins, the executive member for community safety, said Labour councillor Mike Woollacott was “totally irresponsible” for ignoring police advice and encouraging a counter-demonstration in the city centre. He added Marvin Rees, the party’s nomination for elected mayor, was weak, easily led and naïve for supporting him if he did not think violence would follow. Cllr Hopkins also attacked Bristol East MP Kerry McCarthy for calling for a ban on the EDL march.

But at the weekend, the We Are Bristol group – made of trades unions and community groups – hit back, asking whether the Liberal Democrats were “playing the race card”.

“We Are Bristol are shocked at the attack by leading Liberal Democrats in the city on Marvin Rees and Councillor Mike Wollacott for giving their support to the rally against the racist EDL,” the group spokesman Martin Upchuch said.

“Our march and rally was supported by over 1,000 people, including trade union branches and community organisation across the city. Yet the Liberal Democrats in their statement have chosen to denigrate the people of Bristol who have dared to stand up against the racism and bigotry of the EDL.

“We call upon the Liberal Democrats to withdraw their statement immediately, and to respect our political representatives’ right to do their proper job of speaking up for the people of Bristol.”

About 400 EDL members marched through Bristol on Saturday, July 14, with more than 1,000 police drafted in from around the country to marshal the crowd.

Despite police demands for a counter protest to be moved to Castle Park, a group of about 200 anti-EDL protesters gathered at the fountains in the city centre, before moving to the park and then on to the Pride event on College Green.

Although there were some skirmishes on the fringes of the EDL march, the day passed relatively peacefully – no thanks to the statements made by the Labour members, according to Cllr Hopkins.

“The Labour Party were well aware that there was likely to be street violence but still persisted in supporting direct counter-demonstration and, it is reported, speaking at the rally,” he said.

“Labour councillor Mike Woolacott faces calls to step down from his position of responsibility on the council after he tried to put pressure on the council leader to speak on behalf of UAF and then ignored police attempts to bring order by encouraging a potentially dangerous assembly in a provocative place. Does Mr Rees support Councillor Woolacott or not?

“This was totally irresponsible. Marvin Rees has shown himself to be weak, easily led and – if he didn’t realise violent disturbances might follow – naïve, as well.

“Let’s be quite clear how serious this situation could have been. The violence could have been a great deal worse, had it not been for excellent policing and the calm, statesmanlike approach of the Muslim community.

“It beggars belief that a candidate for the highest office in Bristol should have let unelected Labour activists pull his strings and force him into the very embarrassing position he finds himself in now.

“We recognized – as the Muslim community did – that the march would be better controlled if it was allowed to go ahead and we worked closely with the police and the Muslim leaders to help ensure things went off peacefully.

“Ms McCarthy, however, allowed herself to be reported calling for a ban on the EDL march, which, again, was wholly irresponsible. She has some explaining to do. Was she deliberately stirring up passion and anger for political gain or was she genuinely so ignorant of the facts that she thought a ban was possible?”

Mr Rees, Mr Woollacott and Ms McCarthy have been backed by the TUC in the region, which also called on Bristol politicians to unite against the hatred of the English Defence League rather than turn against each other.

The South West TUC’s regional secretary Nigel Costley said: “Well done to all those politicians who had the courage to speak at the anti-EDL demonstration. The attacks on them by Bristol’s Lib Dems is a great shame as politicians should unite in blaming the hatred spread by the EDL for problems during the day.

“Congratulations to Cllr Mike Woolacott for helping to steward the anti-EDL demonstration that helped channel the understandable anger at the EDL’s assault on Bristol’s diverse community. As it turned out the right wing group mustered only a couple of hundred supporters for their racist stunt.

“It was good to have Labour politicians like Kerry McCarthy and Marvin Rees speaking alongside trade unionists and community activists to declare that the EDL are not welcome here.”