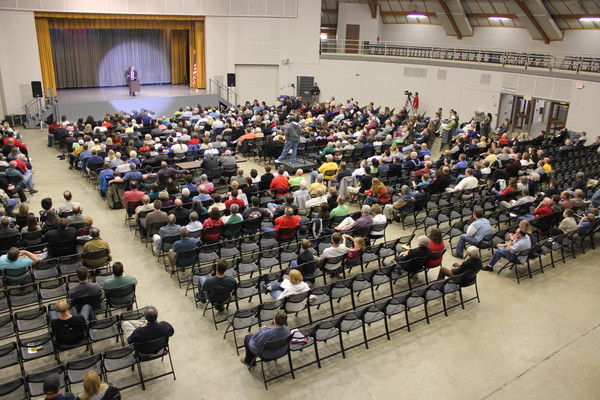 With the big-name draw of Walid Shoebat, more than 200 people gathered at the Waukesha Expo Center Saturday night to hear the message that Islam is a growing threat to law and peace in the United States.

The rally was an especially strong draw for Brookfield residents who oppose a mosque proposed for the city by the Islamic Society of Milwaukee.

Shoebat, who says he is an ex-terrorist, has been confronted about his past by media outlets like CNN, who reported they could find no evidence to support his background story. But he stood by his case Saturday, saying the media were the real frauds.

“Heck, sometimes even FOX News doesn’t even like what I have to say, because I say Islam is not a peace-loving religion,” Shoebat told the crowd.

Brookfield residents Chuck and Sharon Bloom left the rally Saturday with a plastic bag full of books sold by VCY America, a Christian radio station that sponsored the event. The couple was hoping to learn more about Islam and to build a case against the proposed mosque.

“More than just me and my wife, the community needs to be informed,” Chuck Bloom said. “I think it’s important to find out exactly what questions we need to ask to make sure there’s no sharia law, etcetera.”

Sharia law was the buzz phrase of the evening, especially surrounding the mosque. Shoebat said while he supports freedom of religion, Islam as an institution stretches beyond religious practice with sharia law. Sharia guides all aspects of Muslim life including daily routines, familial and religious obligations, and financial dealings, according to the Council on Foreign Relations.

“It’s not the mosque I have a problem with,” Shoebat said, making no specific reference to the Brookfield proposal. “It’s, where is the funding coming from, and will the mosque sign and swear that they will never be sharia?”

Brookfield aldermen were invited to the event and had reserved seats in the front row, but the seats were quickly filled by other attendees when it appeared they did not show up.

Brookfield Mayor Steven Ponto and Alderman Scott Berg have both previously stated they do not think the religion of Islam should be considered in deciding whether to grant the Islamic Society of Milwaukee the permit they need to build their proposed mosque for land northeast of the intersection of Calhoun Road and North Avenue.

But Shoebat’s comments were echoed by the audience as the filed out of the Expo Center.

David Ball, a pastor from New Berlin, said he came “to find out if the message about what Islam really is is getting out properly”. “I hold freedom of religion very dear, but Islam is not just a religion; it is also a state government system, completely contrary to our system of government,” Ball said. “Our Constitution should not be subverted to sharia law.”

Brookfield resident Robin Couillard said she found out about the proposed mosque for the first time at the event. She said she was especially concerned about Shoebat’s remark that a mosque is like an embassy for Islam and sharia law. “I’m just shocked that this is being proposed for Brookfield,” she said. “I’m concerned about Islam overtaking our community, and our country, and the world.”