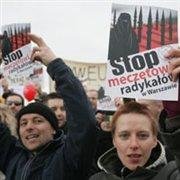 On 27 March a previously previously unknown group, Europe of the Future, held a protest against the proposal to build a new mosque in Warsaw (see here and here).

A reader from Poland has drawn our attention to the rather bizarre fact that a Buddhist organisation played a leading role in the protest. The organisation is called Diamond Way and is headed by a Dane named Ole Nydahl. Our correspondent tells us that “members of the Diamond Way organisation were prominent in TV coverage of the demonstration against the mosque”.

Indeed, the Polish journalist Robert Stefanicki reports that Europe of the Future is headed by the former president of of Nydahl’s organisation in Poland. Stefanicki adds: “Other supporters of Europe of the Future are Mlodziez Wszechpolska (All-Polish Youths) – ultra right group with hardly hidden fascist attraction, as well as other islamophobic right wingers. Weird coalition, isn’t it?”

Ole Nydahl is apparently notorious for his anti-Muslim rhetoric. In a 2008 interview he was asked: “In your view, is there a redeeming value within the Abrahamic religions?” To which he replied:

“The Abrahamic religions, the ones that follow our constitution, treat women well, don’t blow up people … Judaism and Christianity are fine. Islam, I warn against. I know the Koran, I know the life story of Mohammad and I think we cannot use that in our society today. People like the Sufis and Bahá’ís are different, right. They are usually being killed as soon as the mainline Muslims come in, they start killing the other guys.”

Our Polish correspondent says they attended a lecture by Nydahl in Warsaw: “I had heard some comments previously that suggested that Nydahl held Islamophobic views, but I was frankly shocked as to the depth of his anger and hatred against Islam and Muslims, and the way he uses his position to preach much misinformation and factual inaccuracies regarding Islam and Muslims and to incite hatred against Islam amongst his followers.”