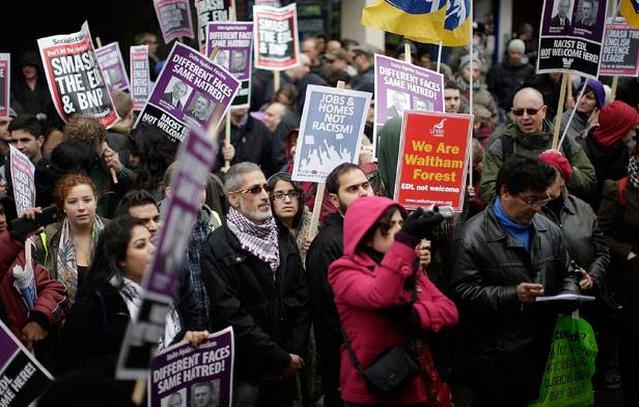 Campaigners against the far-right English Defence League (EDL) defied a protest ban by marching through Walthamstow after scuffles with police this afternoon.

Officers struggled to contain a crowd of several hundred who broke away from a legal static protest outside the former EMD cinema in Hoe Street at around 1.30pm. Protesters pushed through a cordon and marched several hundred metres down to the junction with Selborne Road, where police reinforcements eventually stopped them.

The static protest began at 11am and was organised by umbrella group We Are Waltham Forest (WAWF) and Unite Against Fascism (UAF) to celebrate their “defeat” of the EDL in the borough.

The EDL, which claims to be a movement opposed to Islamic extremism but which critics say is racist, had wanted to march through Walthamstow today (Saturday October 27). But earlier this week the government issued a ban on all marches in the borough for 30 days following police intelligence there could be violence and disruption. The Met also imposed special “conditions” on the EDL which meant its supporters could only hold a static demonstration outside the Houses of Parliament.

The Guardian witnessed two youths being led from the town centre by police at 10.30am but there was otherwise no visible presence of any possible EDL supporters in Walthamstow.

Estimates over the number of people who attended the static anti-EDL rally vary from 200 to 1,000. A series of figures, including union representatives and WAWF campaigners, held speeches from a lorry before the crowd was told to “walk orderly” back to Walthamstow Central by organisers just after 1pm.

But defiant sections of the crowd chanted “let us march” and pushed past police who were outnumbered. The Guardian did not witness anyone being arrested or injured. Some protesters and police officers pushed each other but this newspaper did not see any serious violence.

Meanwhile a council-organised funday on the adjacent Arcade Site and town square designed to celebrate the borough’s diversity was largely unaffected by the protest. Fairground rides on the Arcade Site did not open at 11am as advertised and attendance was initially low, although later in the day dozens of families and children came to enjoy the activities.

However speakers at the anti-EDL rally criticised the event, including Walthamstow vicar Stephen Saxby, who described it as a “farce”. He said: “There are table tennis tables there – how is that celebrating the multiculturalism of this borough?” Rev Saxby also criticised the ban on all marches in the borough, calling it a “disgraceful attack on local democracy”.

His views were echoed by other speakers such as Jo Cardwell of WAWF. She told the crowd: “The only reason why they [the police] applied for a ban today is not because they suddenly realised that the EDL is fascist, but because they knew there would be at least 7,000 people on the streets of Walthamstow against the EDL.”

She added: “Walthamstow has broken the back of the EDL. We’ve built the coffin that they’ve climbed into”. 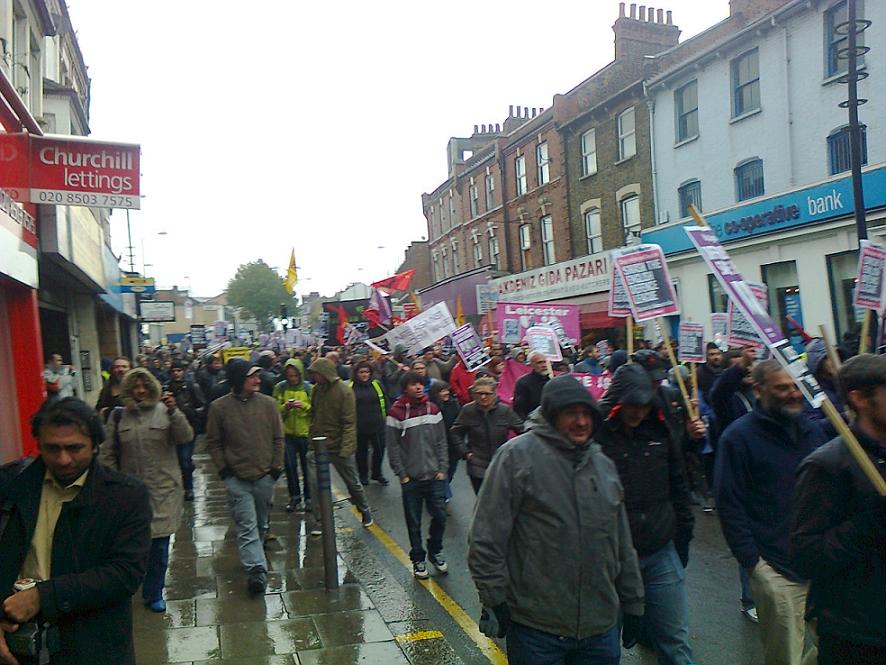