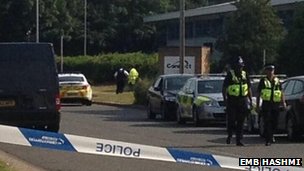 Two men have been arrested in connection with an explosion near a mosque in Walsall last month.

A 25-year-old and 22-year-old, both Eastern European, are being questioned by detectives from the West Midlands Counter Terrorism Unit. An area near Talbot Way, Small Heath, Birmingham, is being searched. Some nearby properties have been evacuated. Parts of Small Heath Highway, Golden Hillock Road, and Coventry Road are closed.

One eyewitness told BBC WM about 100 people had initially been evacuated from businesses close to the area being searched. Embreen Hashmi said:

“All of a sudden there was an entourage of police and they cordoned off the whole business park and everybody had to come out on to the street. We weren’t sure what it was and everybody was saying that it was some sort of bomb scare which frightened us. When we spoke to people that worked in the same building as one of the suspects he said there was a chap that they used to work with and that he was actually being forced down by armed police and they had to evacuate the building.”