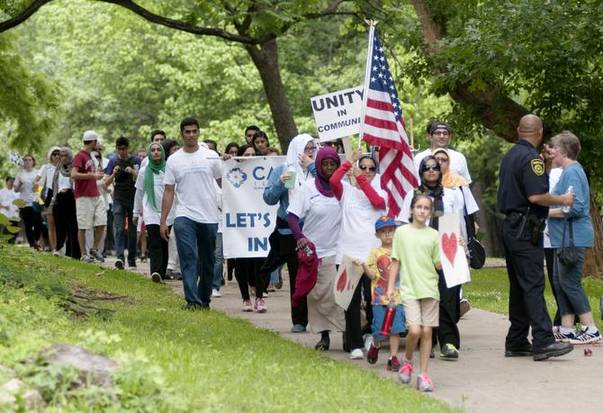 More than a decade after the 9/11 attacks inspired widespread animosity toward the Islamic faith, many Muslims say they continue to experience bias, hate and misunderstanding.

On Saturday, a group of about 80 Muslim activists gathered at Reverchon Park in Dallas’ Oak Lawn area for a walk to raise awareness about the issue. Walk Against Islamophobia was hosted by the Dallas-Fort Worth chapter of the Council on American-Islamic Relations and a group of young Muslim activists called Enlightened Generations.

Yvonne Munoz, a lawyer with a Christian upbringing, converted to Islam in 2008. Proudly wearing a black head scarf, she said she regularly said she faces discrimination at work. “I deal with Islamophobia on a regular basis with clients all the time,” Munoz said. “Automatically my clients will not want to meet with me and want somebody else. Once they meet with me and find that I am kind and helpful and … they change their idea.”

Munoz took part in the walk with the group American Muslim Professionals.

Although the 9/11 attacks were carried out by Islamic extremists loyal to Osama bin Laden and al-Qaeda, some people associate all Muslims with terrorism. Munoz and others hope events like Saturday’s walk might help break that connection in people’s minds. “Islam brought peace in my life,” Munoz said. “I was able to put myself through a lot of struggles I would not have been able to do if I didn’t find a peace.”

Before the walk began, participants heard speakers share personal experiences of discrimination. One speaker, Dallas activist Nicole Queen, said that during a recent lunch with a friend, someone put bacon in her drink as a joke. “They were hoping I would slurp it or eat something I am not supposed to eat,” Queen said. “I did not have anything like that happen before until I chose to be a Muslim. It was eye-opening to me,” Queen said.

Wes Magruder, senior pastor at Kessler Park United Methodist Church in Dallas, said he began advocating for Muslim rights after attending an anti-Muslim rally in downtown Dallas. “I went to the rally, and I have to say I was absolutely shocked,” Magruder said. “I was not prepared for what I heard or what I saw. I heard and I saw the reality our Muslim brothers and sisters live with all the time.”

Many activists that day, including Christian pastors, chastised him for advocating for Muslim rights, he said. “That scared me. The things I heard were shocking. I heard Muslims described as ‘Third World Neanderthals.’ I heard all about the Muslim plot to take over the world,” he said. “Christian pastors told us we were not Christian pastors — that we were the enemy and a disgrace to our churches.”

Alia Salem, executive director of the Council on American-Islamic Relations’ Dallas-Fort Worth chapter, said she was pleased by the diversity among groups that chose to take part Saturday. “We want to promote activism in our youth, and so I am very happy and excited about the turnout,” she said.