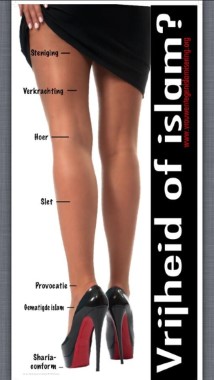 Evidently pleased with the publicity generated by this stunt, last week VB followed it up with a new poster featuring a photograph of Anke Van dermeersch, the former Miss Belgium who is leader of the VB group in the Belgian senate, hitching her skirt up her legs. Various hem-lengths are marked, with “stoning” at the top and “sharia-compliant” at floor level. The photo is accompanied by the same slogan that appeared on last year’s poster – “Freedom or Islam?”

Van dermeersch, who also heads Women Against Islamisation, used the opportunity to denounce “mass immigration” and claim that “Islam is fundamentally misogynistic”.

But things haven’t worked out too well for VB since then. First of all Christian Louboutin, who designed the high heels that Van dermeersch’s legs are perched on, demanded that the poster be withdrawn and all accompanying publicity material destroyed, because the association with VB was damaging to the company’s image. A court action is underway.

On top of that, it turns out that the photograph used on the poster is plagiarised from the Canadian artist Rosea Lake, who is also angry at VB’s appropriation of her work to promote hatred and intolerance. Lake says she doesn’t have the money to take legal action against VB or Van dermeersch. Hopefully someone will be able to rectify that.