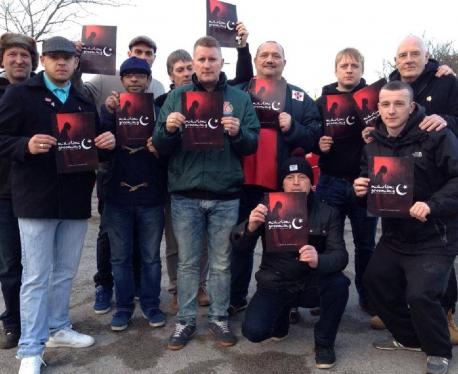 A group seen abusing Muslims outside a London mosque have now launched an ‘anti-grooming campaign’ in a Lancashire Town.

In the video members of the Britain First group, can be seen driving through a predominantly Asian area of Blackburn in what it states is a “new direct action campaign against the scourge of Muslim paedophile grooming gangs”.

In London there was widespread condemnation of the actions of the group with members swigging beer and seen abusing Muslims as they left the East London mosque. In the film, one man says: “This is our country. You want to live here, you adhere by our laws.”

Last year members of the equally vile ‘Muslim patrols’ who threatened strangers for holding hands, drinking alcohol and other behaviour they deemed ‘un-Islamic’ were jailed.

In the new video, Britain First Group chairman Paul Golding is seen spouting, “We have gone through some areas which are exclusively Muslim. Everyone has been told that we are the minority in this town. These areas we are going through now are 100% colonised by Muslims. We have been visiting establishments, bed and breakfasts and takeaways. We hope it will put a dent in the Muslim grooming in this town.”

In the video the group visits a Premier Inn and a Travel lodge. They visit a supposed ‘mega mosque’ where an elderly man welcomes them inside not realising who they are. They simply hand the literature and walk off. He doesn’t seem to understand what they are saying. They then visit the mayor of Blackburn with Darwen’s house. He is not home and they post the offensive literature through his door.

Councillor Salim Mulla was shocked that members of the group visited his house, “Luckily, no-one opened the door. I have seen the literature in question and I am appalled by it. I am going to hand the literature to the police.

“This is a fascist group and no-one should entertain them. I am going to be asking the LCM (Lancashire Council of Mosques) to write to all the mosques and asking them to be aware of this group. If they appear on their doorstep that they should pick up the phone and call the police.

“If someone breaks the law it is the job of the police force to investigate not vigilante groups such as this.”