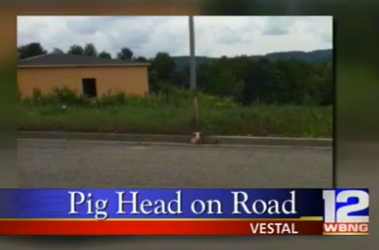 Some residents are upset over the placement of a pig’s head near a mosque under construction in Vestal.

A resident said they spotted a severed pig’s head Sunday morning on Sheedy Road. The pig’s head remained there for most of the day. The nearby mosque is expected to open in April of next year.

Vestal police could not be reached and town Supervisor John Schaffer declined comment.

Rehman said the town and neighbors have been very supportive of the local Muslim community.