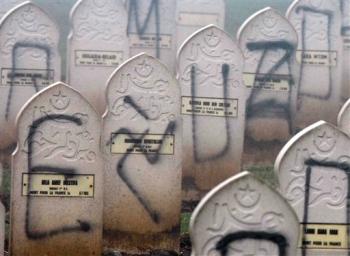 The graves of as many as 500 Muslim war veterans have been vandalised in northern France, in an attack President Nicolas Sarkozy said was “repugnant”.

Gravestones were daubed with swastikas and letters spelling out anti-Islamic slogans at France’s biggest military graveyard near Arras in the north-east.

The attack took place on the eve of Islam’s Eid al-Adha festival, when Muslims visit the graves of loved ones. Dozens of police searched the graveyard on Monday as an investigation began. It is the third time the Muslim sector of the Notre Dame de Lorette cemetery has been attacked.

President Sarkozy called the latest incident “abject and revolting” and said it was “the expression of a repugnant racism directed against the Muslim community of France”.

The cemetery holds the graves of tens of thousands of soldiers killed in World War I, including those of 576 Muslims.

The authorities estimated that about 500 graves were damaged. Vandals had sprayed letters on the tombstones which, when linked together, formed anti-Islamic insults, the French news agency AFP said.

The local prosecutor says the damage resembles another act of vandalism in April, for which two young men with neo-Nazi sympathies were later jailed. One of them had already been jailed for a previous attack on Muslim graves at the cemetery.

Police say security has been reinforced but the site remains difficult to guard.