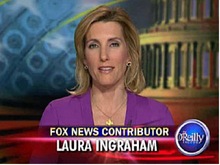 On her show today, right wing radio host Laura Ingraham said that the United States should no longer allow immigrants from majority Muslim nations. Ingraham added that she didn’t think people from Central Asia should be allowed in at all:

“How do we give asylum to people from Islamic countries, or Islamic territories, who are claiming that they are somehow deserving of this? I don’t even understand that… I would submit that people shouldn’t be coming here as tourists from Chechnya after 9/11. Dagestan, Chechnya, Kyrgyzstan, uh-uh. As George Bush would say, ‘None of them stans’.”