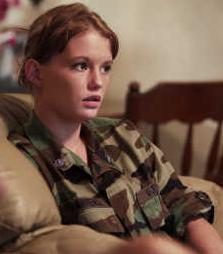 Fervent patriots held Heather Lawrence up as a hero. When her story broke last week, bloggers and online commenters praised the 16-year-old junior and JROTC member at Springstead High School for confronting a Muslim student for not standing during the Pledge of Allegiance.

Lawrence, however, fabricated that part of the story, school officials say. “This girl lied,” Springstead principal Susan Duval said Monday. “I have confirmed with the homeroom teacher the young (Muslim) lady stood for the pledge.”

Lawrence said she was walking by another homeroom Wednesday morning when she saw a girl with the traditional Muslim head scarf sitting during the pledge. Later, Lawrence said she confronted the girl, told her she should stand during the pledge out of respect and, according to her own account and a school report, said, “Take that thing off your head and act like you’re proud to be an American.”

A teacher witnessed the confrontation and Lawrence was suspended for five days for violating the district’s policy against bullying and harassment. The suspension has since been reduced to three days.

After the incident, Heather Lawrence was asked by a teacher why she confronted the girl. “She began to rant that she was enlisting and was going to Iraq and that basically because the girl looks Middle Eastern, that makes her an enemy because all Iraqis are Middle Eastern,” according to the referral signed by assistant principal Stephen Crognale.

The story, reported by the Times and other local media Friday, went viral, prompting some praise for Lawrence for speaking her mind and boos for school officials for quelling her free-speech rights. Duval said the school has received calls from angry people who have “abused” her staff.

Ahmed Bedier, president of the Human Rights Council and a personal friend of the girl’s family, said Monday he would relay a request by the Times for comment, but no one had called by deadline. The family is reluctant to go on the record with the media, Bedier said.

On Saturday, the Muslim girl’s father found his daughter reading online news stories about the incident and the comments from readers, he said. “She was crying,” Bedier said. “She said, ‘I didn’t do anything wrong. Why are these people saying all these horrible things?'”

The story is troublesome because it has stoked negative feelings toward Muslims among some Americans, Bedier said. “There are some very well-known anti-Muslim blogs and Web sites, and they’re taking up this cause of Heather Lawrence,” he said. “This girl got caught bullying someone else, and to deflect it she’s making it about patriotism and the flag.”