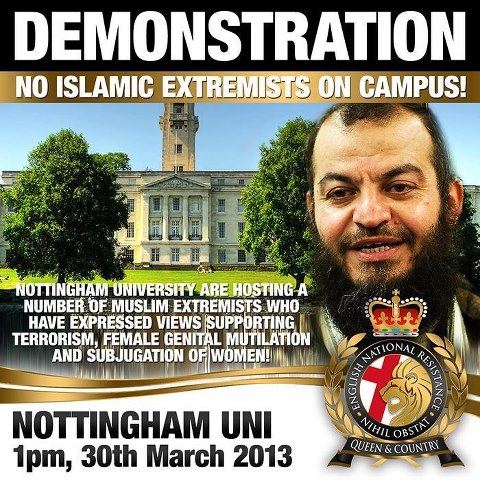 The EDL/NEI protest in Sunderland wasn’t the only far-right anti-Muslim demonstration on Saturday. A number of fascist groups gathered outside the University of Nottingham to protest against the Family Retreat event being held at the conference centre over the Easter weekend, at which Haitham al-Haddad was an advertised speaker.

It was the Casuals United group who took the initiative in launching a campaign against this event. On 18 March they announced that “the Jihadis” were organising a “hate speech conference” and called on their supporters to phone Nottingham University and threaten that an intimidatory demonstration would be held unless the event was cancelled. The following day they reported: “We have spoken to Notts Uni this morning and told them in no uncertain terms that if they do not cancel this Islamic hate speaker that is booked in a weeks time we will be along with various other groups doing a series of demos at their campus and conference centre.” The Nottingham division of the English Defence League English Defence League gave their assistance, as did Britain First, a breakaway from the British National Party.

The involvement of the far right didn’t prevent the Quilliam Foundation from joining the campaign to get the Family Retreat weekend banned. Inayat Bunglawala revealed that on 20 March an email was circulated in the name of Quilliam senior researcher Usama Hasan asking contacts to sign an open letter to Haitham al-Haddad, with the aim of getting publicity in the national press and embarrassing Nottingham University into cancelling the event. As a source for its allegations against Haddad, the Quilliam email referred recipients to the Islamic Far-Right in Britain blog, which is run by a former activist in the English Defence League. As it turned out, for reasons that are unclear the open letter was never published.

To their credit, the university authorities stood firm against this campaign. As they explained to the student publication Impact, their refusal to be intimidated into cancelling the conference stemmed from “the University’s commitment to freedom of speech”, adding: “This commitment sometimes means listening to challenging views, but it is a principle we defend. It sometimes means the University comes under pressure, including pressure from groups wishing to protest on its campuses. The University took appropriate steps to ensure that normal business was not disrupted by such activity over the weekend.”

Faced with the university’s principled stand, a far-right protest went ahead at the university campus under the auspices of the English National Resistance, which is essentially a front organisation for Britain First, with the active support of other far-right groups including the Casuals, the English Volunteer Force and the Infidels. As you can see from the photo below, this show of far-right unity didn’t mobilise any significant forces, and the Family Retreat weekend went ahead without any problems. Given previous experience of far-right campaigns forcing the cancellation of similar events, this outcome is worth highlighting.

Without wishing to downplay the real threat of violence and disorder posed by the thugs of the far right, the forces that the Casuals and their fascist friends can mobilise are not so large as to represent an insuperable security problem. Hopefully other venues where Muslim events are held will in future follow Nottingham University’s admirable example in standing up to the intimidation of the far right. 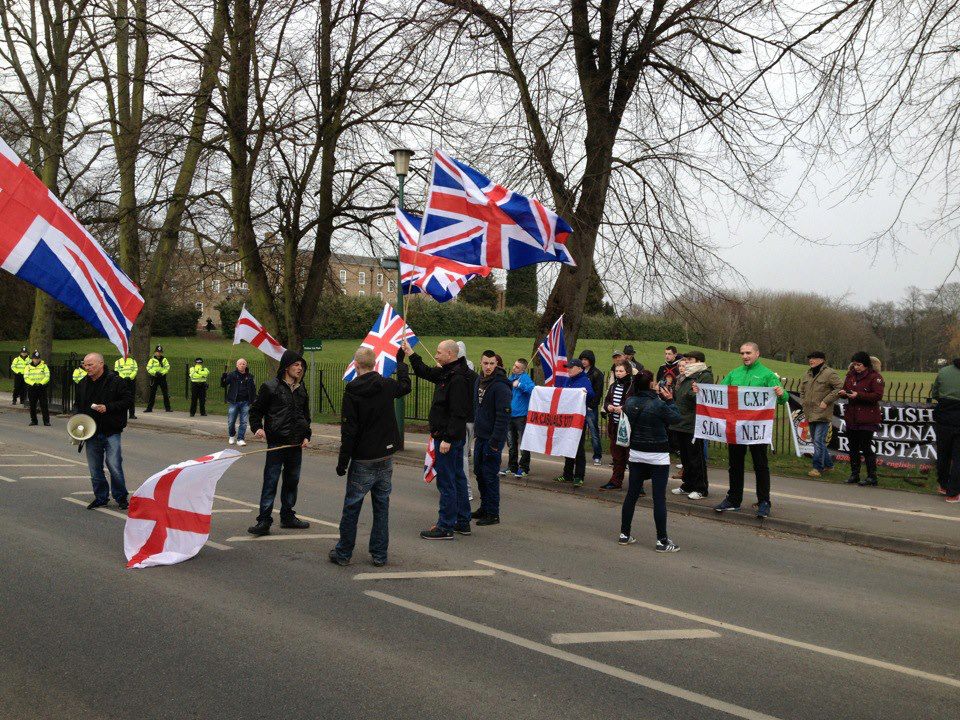