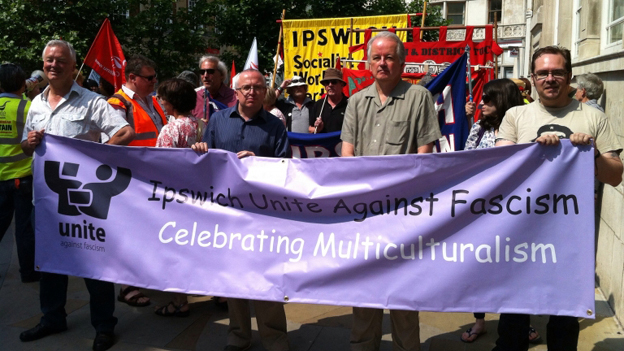 About 130 people have marched through Ipswich town centre in a show of “unity” against the English Defence League (EDL). Unite Against Fascism (UAF) said it held the march after members of the EDL protested outside a recent meeting in Ipswich, shouting “racist comments”. About 25 EDL members held a counter march in Ipswich on Sunday, saying UAF supported “Muslim extremists”. There were some heated exchanges but the marches were without any violence.

Miles Hubbard, regional official of the Unite union in Ipswich, said the march was to show the EDL “do not speak for Ipswich”. “Ipswich has always been a multicultural town with people of different communities and cultures living side by side in harmony,” Mr Hubbard said. “There’s room for all kinds of political debate, but the EDL has shown by their behaviour the other day and elsewhere that they are not a mainstream political organisation. They are a fascist organisation in the tradition of the BNP and the National Front.”

Shane Willmott, Ipswich division leader of EDL, was part of the protest outside the recent meeting at Unite’s Grimwade Street office. He said nothing untoward happened outside the UAF meeting and that the group’s presence on Sunday was because they had become frustrated at attempts to disrupt EDL marches.

“[We’re here to] peacefully demonstrate against the UAF because everywhere we go they stop our marches, block our demo routes,” he said. “We’re trying to stop Islamic extremists taking this country over and Sharia law. Why should women be told what to where, when to wear it? Not to do this, not to do that. There’s not enough people to stand up to it.”