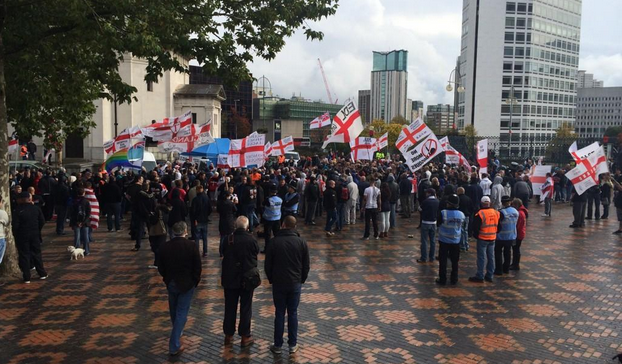 In contrast to last year’s violent scenes, yesterday’s English Defence League protest in Birmingham passed off relatively peacefully, with only ten arrests. Although 750 demonstrators were expected, and some EDL sources had been predicting as many as 3000, the Birmingham Mail‘s reporter estimated attendance at “not more than 500”. Some 300 anti-racists joined a counter-protest organised by Unite Against Fascism.

Given the lack of an immediate issue over which to whip up the anger of EDL supporters – the publicity for yesterday’s event featured an extended shopping list of Islam-related grievances – it is not surprising that the protest failed to mobilise larger numbers. However, for a demonstration whose ambitious objective was to “give heart to millions who are intimidated by political correctness”, this was hardly an impressive show.

Despite receiving the occasional temporary boost from events like the Rotherham sexual abuse scandal, as a street movement the EDL continues its slow decline. National demonstrations serve a social function, providing an opportunity for a hard core of EDL members to meet up and get pissed with fellow bigots, but without some additional impetus they can be expected to attract no more than four or five hundred participants.

However, it would be a mistake to write the EDL off or downplay the threat that it poses. Street protests are just one component in its strategy of inciting anti-Muslim hatred, the main impact of which is now felt over the internet. The EDL’s demonstrations may only attract hundreds, but its Facebook page currently has over 176,000 likes.