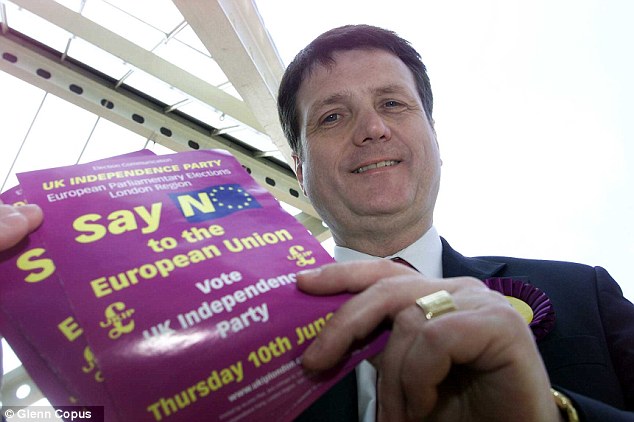 A Ukip MEP believes that British Muslims should sign a special code of conduct and warns that it was a big mistake for Europe to allow “an explosion of mosques across their land”.

Gerard Batten, who represents London and is member of the party’s executive, told the Guardian on Tuesday that he stood by a “charter of Muslim understanding“, which he commissioned in 2006. The document asks Muslims to sign a declaration rejecting violence and says parts of the Qur’an that promote “violent physical Jihad” should be regarded as “inapplicable, invalid and non-Islamic”.

Critics said his comments represent the “ugliest side of Ukip” and “overlap with the far-right”, in spite of the efforts of party leader Nigel Farage to create a disciplined election machine ahead of the European elections.

Asked on Tuesday about the charter, Batten told the Guardian he had written it with a friend, who is an Islamic scholar, and could not see why “any reasonable, normal person” would object to signing it. Batten also repeated his view that some Muslim texts need updating, claiming some say “kill Jews wherever you find them and various things like that”.

Asked why Muslims have been singled out, rather than followers of other faiths, Batten said: “Christians aren’t blowing people up at the moment, are they? Are there any bombs going off round the world claimed by Christian organisations? I don’t think so.”

In a separate video interview from 2010, Batten also proposed a ban on new mosques across Europe, suggested Muslim countries should not be “appeased” and warned of the threats of having “two incompatible systems living in the same place at the same time”.

Farage’s effort to rid the party of “Walter Mitty” types comes after a stream of controversies, including the party’s suspension of a councillor for blaming flooding on gay marriage and the ejection of MEP Godfrey Bloom following comments about women and sending foreign aid to “bongo-bongo land”.

With Ukip hoping to top the polls in May’s European elections, Batten is top of the party’s MEP candidate list for London, having passed a round of psychometric testing to make sure his views were acceptable.

However, Batten – Ukip’s spokesman on immigration and a former candidate for London mayor – appears to have held some controversial positions on Islam for some time. His “proposed charter of Muslim understanding” was written in 2006 by Sam Solomon, a former Muslim who converted to Christianity, with a foreword by the MEP himself.

In a press release from the time, published on Ukip’s website, Batten calls on Muslims to sign a five-point affirmation, in which they would promise to accept equality, reject violence in the name of religion, and accept a need to “re-examine and address the meaning and application of certain Islamic texts and doctrines”.

Asked on Tuesday whether he still believed Muslims should sign the charter, Batten said: “I don’t suppose the pope would disagree with it or the archbishop of Canterbury or anybody else. So why should they feel aggrieved that they might be asked to sign. They don’t have to. If they don’t believe in those five points, they don’t have to sign it.”

In the 2010 interview, Batten suggests a ban on new mosques in “our cities” and warns it was wrong to have allowed so many already. “They don’t allow Christian churches or Hindu temples to be built or any kind of non-Muslim place of worship in many of their countries and certainly not in the heartland of their religion,” he said. “Well, if they don’t allow it, why can they expect to see their religion tolerated somewhere else?”

And pressed on whether he was confusing individual Muslims with the actions of some Muslim states, he said: “They should be protesting about people being arrested in Saudi Arabia for carrying a Bible. Maybe that’s what they should be getting upset about and protesting about. Showing they are in the same mindset as the rest of us.”

Rehman Chishti, the Conservative MP for Gillingham and Rainham, said Batten’s position was “shocking”, particularly the “charter of understanding” suggestion that parts of the Qur’an should be rendered “inapplicable”. “If Nigel Farage had any credibility, he would quite clearly not allow this individual to stand for office in Ukip,” he said.

Sadiq Khan, Labour’s shadow London minister, also said he was “appalled at the ignorance that Gerard Batten appears to have shown when speaking about the faith that I and hundreds of thousands of British Muslims practice”.

Mary Honeyball, a Labour MEP for London, said that Batten “represents the ugliest side of Ukip”. “Batten’s views overlap with the far-right. The idea that Muslims should be singled out in the way he suggests is a relic from a darker, more prejudiced time,” she said.

Some of Batten’s other controversial views include bringing back the death penalty for certain crimes. He has also sought to highlight the issue of powerful politicians attending the secretive Bilderberg conference and immigration of Romanians and Bulgarians.

In a statement to the Guardian, Batten later said: “I would expect the fundamentalists to agree with me that democracy is incompatible with fundamentalist Islam. Moderate Muslims have to decide which side of the argument they are on. Who is in favour of jihad? Apart from the jihadists of course? I was, and still am, happy to speak out against it. It is amusing that the Guardian equates being opposed to extremism and jihadism as ‘overlapping with the far-right’. So are left-wing liberals in favour of jihad? If not, do they overlap too?”

It comes the day after Ukip distanced the party from Mujeeb ur Rehman Bhutto, its former Commonwealth spokesman, who was revealed by BBC Newsnight to have once been part of a kidnapping gang.