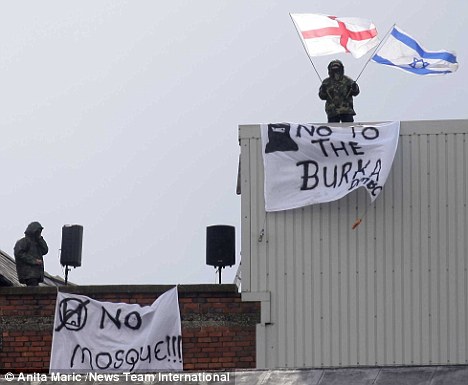 Members of the English Defence League (EDL) have been deliberately provoking Muslim communities in Dudley for over 12 hours, by staging a rooftop demonstration on the site of a proposed Mosque that communities are seeking planning permission for.

The EDL have been playing the Muslim call to prayer on loud speakers, from late last night, attempting to provoke Muslims to go to the site and create the impression to Dudley residents that Muslims are responsible for the disturbance.

The EDL’s actions are breaching several laws, including the Public Order Act and incitement to religious and racial hatred legislation. However the police are failing to take appropriate action to control the situation. Despite there being initially only around 20 EDL demonstrators on the roof-top, the police have failed to bring the situation under control and at least 3 EDL supporters are still on the roof. No arrests have been made.

In response to this provocation by the EDL, local Muslims and their supporters have also begun to gather in the area.

At the same time, the EDL have now decided to escalate the situation and have called on their supporters to go to Dudley. Currently hundreds of EDL from around the country are gathering in Dudley. There is no question but that the EDL are trying to provoke a confrontation or start a riot.

“I am disappointed that the police are not taking action to enforce law. The EDL’s action are a clear breach of the Public Order Act and incitement to religious hatred legislation. The EDL are making a mockery of democracy. Democracy is expressed through the law of the land. The High Court has given permission to look into proposals for building a Mosque on this site. This is nothing but electoral opportunism by fascist fringe organisations, that present a direct threat to democracy.”

“This is a deliberate attempt to provoke Muslims and cause violent confrontation, potentially a riot. The EDL is an organised, fascist, violent, criminal conspiracy and a menace to the whole of society. Action must be taken to stop this grotesque attack on the Muslim communities. The police’s response has been totally inadequate by failing to arrest perpetrators of religious and racial hatred. We call on the police to bring the EDL actions to an end immediately and prevent a situation escalating where real violence takes place.

“Posts on EDL blog sites have clearly stated that this action is deliberately coinciding with the elections and aimed at encouraging people to ‘vote wisely’ i.e. for the BNP. There have been previous incidences of extremists attempting to boost the BNP vote through violence. When nail bomber David Copeland attacked Brick Lane, Brixton and Soho, he explicitly said he wanted to start a race war to encourage people to vote for the BNP.

“This latest situation in Dudley underlines the UAF view that the extensive air-time given to the fascist BNP, in the run-up to and during this election, is encouraging thugs on the street to engage in racist violence. Whoever forms the next government has to take decisive action to prevent this fascist street violence continuing and escalating.”