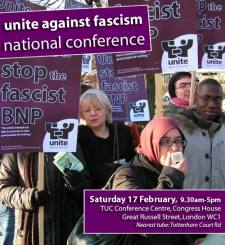 The British National Party (BNP) is receiving the highest levels of support for a fascist party in British history. In recent years its vote has increased in a context of rising racism, Islamophobia and attacks on multiculturalism. At the 2006 local elections it polled over 238,000 votes compared to 3,000 votes in 2000, and now has a record 49 local councillors.

The BNP is a fascist organisation. As history shows, fascism stands for the total annihilation of whole communities, freedoms and democratic rights.

In 2007 the BNP will be targeting the local elections in England and Wales and elections to the Scottish Parliament and Welsh Assembly.

Active campaigning can stop the BNP. In the 1930s the Jewish and Irish communities, trade unions and others defeated the fascist Blackshirts at Cable Street, and in the 1970s the National Front was defeated by mass anti-Nazi campaigns. More recently the BNP was defeated in Millwall and Oldham. Learning lessons from these campaigns is crucial.

Unite Against Fascism is organising this national conference to look at the impact of increasing BNP support, to discuss strategies that have been successful in stopping the BNP and to bring together the broad opposition that is needed to halt the rise of fascism including from trade unions, Muslim, Jewish and other faith communities, black, Asian, lesbian, gay and disabled communities and students.