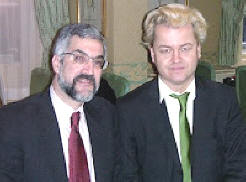 Dutch politician Geert Wilders has once again become the subject of controversy after he led supporters in an anti-Moroccan chant during a campaign rally last month. Despite the mass condemnation he has received for the remarks, Wilders’ anti-Muslim counterparts in the United States are standing by his draconian approach to immigration.

While at the rally in The Hague, Wilders, who heads the Party for Freedom (PVV), asked the crowd: “Do you want in this city more or fewer Moroccans?” to which they chanted, “Fewer! Fewer! Fewer!”

“We’ll take care of that,” he responded with a wry smile.

Wilders later defended his comments and outlined his party’s plans to uphold his promise by “limiting immigration from Islamic countries, including Morocco” and promoting “re-emigration.” Wilders also plans on “deporting criminal Moroccans by revoking their Dutch passports” – as well as their dual-citizenship – and “sending them back to their country of their nationality.”

However, many PVV members believe Wilders has gone too far with his latest spectacle, and has led to a crisis within its ranks. Many have chosen to resign and disassociate themselves from the party, including Laurence Stassen who represents PVV in the European Parliament. “I deeply regret having to take this decision, but staying in my function was not an option after these comments,” she said in a statement.

Despite the mass exodus from his own party, anti-Muslim activists in the United States continue to uphold Wilders as a symbol of resistance against the devastation they believe will come as a result of an increased Muslim population:

Wilders’ latest diatribe is rooted in an anti-immigrant and anti-Muslim platform that has made him one of the most prominent figures of the global Islamophobia movement. He has previously advocated against the construction of any new mosques in the Netherlands, claiming they are a “symbol of an ideology of hatred, violence and oppression.” He has also equated the Qur’an to Mein Kampf. Wilders spent the summer forming a new political alliance with France’s far-Right National Front party leader, Marine Le Pen. Their goal is to take on the European Parliament this year. Both parties blame immigration and multiculturalism for Europe’s economic malaise and supposed loss of identity.

Even at a time when Wilders’ own party is trying to distance themselves from his extreme rhetoric, those in the broader anti-Muslim movement continue to show their unwavering support for him.