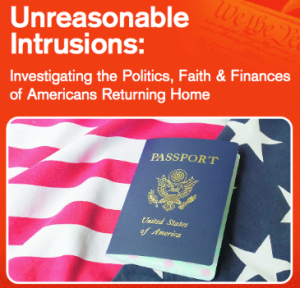 Civil liberties groups are renewing calls for the Obama administration to change screening at border posts by limiting questions about Americans’ political beliefs and religious practices and establishing a process for U.S. citizens and residents who are mistakenly included on terrorist watch lists to clear their names.

In a report to be released today, the Asian Law Caucus of San Francisco cited more than 40 complaints from U.S. citizens and immigrants that it has received since 2007 as evidence of “a much wider pattern of profiling and discrimination at U.S. borders.”

“Many people in America’s Muslim, South Asian and Middle Eastern communities have come to expect harassment and discriminatory treatment at our nation’s doorstep” when returning home, the report said.

Separately, Muslim Advocates, the advocacy arm of the National Association of Muslim Lawyers, issued a report saying that citizens should not be threatened with detention for not answering questions that go beyond establishing their legal status to enter the United States or whether they are carrying contraband.

The actions come as civil liberties groups press for a swifter response by the new Democratic president and Congress to long-standing complaints that security measures adopted after the Sept. 11, 2001, terrorist attacks have subjected innocent travelers to unwarranted delays and scrutiny.