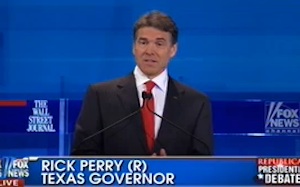 During Fox News’ South Carolina debate, Texas Governor Rick Perry suggested it might be time for Turkey to be kicked out of NATO, saying the country was being ruled by what many would perceive to be Islamic terrorists.

Perry’s response might surprise many, as Turkey is a longstanding US ally in NATO, and a critical diplomatic partner engaged in “a working relationship that is one of the most important but least discussed developments shaping (2011)’s change in the Arab world.”

Moderator Bret Baier asked the Republican hopeful about the country’s Islamist governing party, and outlined many of the problems going on in the nation, including a high murder rate among women, lessening press freedom, and military issues in the region. “Do you believe Turkey still belongs in NATO?”

“Obviously when you have a country that is being ruled by what many would perceive to be Islamic terrorists, when you start seeing that type of activity against their own citizens, then, yes,” Perry boldly proclaimed. “Not only is it time for us to have a conversation about whether or not they belong to be in NATO but it’s time for the United States, when we look at their foreign aid, to go to zero with it.”

Update:  Even Robert Spencer thinks Perry has gone a little too far: “Turkey is not ruled by Islamic terrorists. Turkey is ruled by Islamic supremacists who are working to dismantle Kemalist secularism and transform Turkey into a Sharia state. That is not at all the same thing, although Erdogan certainly shares the goal of jihad terrorists worldwide, which is to impose Sharia.”

But then, Spencer is not a fan of the Texas governor. He has previously criticised Perry for assisting a Muslim Brotherhood plot to infiltrate the US government and for promoting “a complete whitewash of Islam and jihad” in Texas schools.