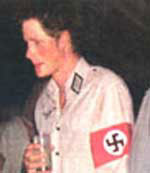 Controversial Conservative blogger Donal Blaney and Tory MEP Daniel Hannan have criticised the views of Rochdale-based director of Muslim youth organisation, The Ramadhan Foundation, Mohammed Shafiq, after he spoke out on the current Prince Harry revelation.

Donal Blaney has described Mr Shafiq has having “the ego the size of a mosque” and said in his blog: “The notion that calling a mate by such a nickname that he himself did not find offensive is ‘sickening’ is laughable. To call it ‘racism’ demeans a powerful word that is now bandied about by the left so often as to have become virtually meaningless other than as a tool to silence those (usually on the right) with whom one disagrees.”

“Mohammed Shafiq speaks for nobody but himself,” said Mr Blaney. “For The Sunday Times to have called him a ‘muslim leader’ is dangerous and wrong. He is not elected by muslims at all – or anyone else. He is what he is: a left-wing community agitator who, despite his protestations of wanting to unite society, seems more intent on dividing society. His attack on Prince Harry should be seen in this light.”

Meanwhile Daniel Hannan MEP, in his blog for the Telegraph, has backed his Tory colleague. He said: “Unsurprisingly, Mr Shafiq came up with a suitably Spartish attack on the prince. And he may, for all I know, have a point. But the fact remains that no one, Muslim or non-Muslim, has ever elected him to any office. Why is he described as ‘Muslim leader’? Whom does he lead?”

“I did not call Prince Harry a racist, I said that his comments were racist, and I have never called myself a Muslim leader, those were the words used by the newspaper. I do not speak on behalf of the Muslim or Pakistani community, I speak on behalf of a Foundation. The word ‘Paki’ is an oppressive and derogatory term. I stand by my comments and I do not believe the Conservatives have a good track record when it comes to defending racial issues.”