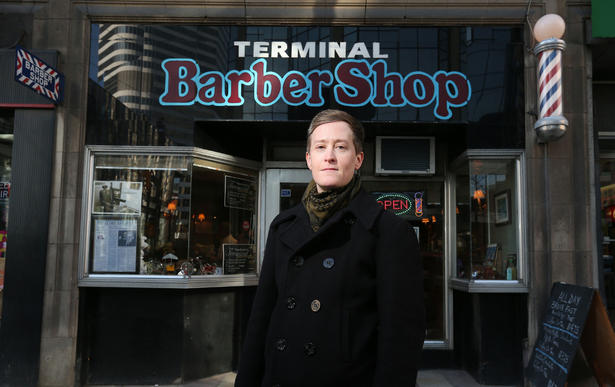 In case of competing rights, a Toronto woman has lodged a complaint against a barber who refused to cut her hair because he’s Muslim.

In June, Faith McGregor requested a man’s haircut at the Terminal Barber Shop in downtown Toronto. Co-owner Omar Mahrouk told her that his Muslim faith prohibits him from touching a woman who is not a member of his family. All the other barbers in the shop said the same thing.

“For me it was just a haircut and started out about me being a woman,” McGregor, 35, told the Toronto Star. “Now we’re talking about religion versus gender versus human rights and businesses in Ontario.”

She has filed a complaint with Ontario’s Human Rights Tribunal of Ontario because the incident made her feel like a “second-class citizen.” McGregor is not seeking monetary damages, but wants the tribunal to force the shop to offer men’s haircuts to both genders.

McGregor rejected an offer from the shop to find a barber to cut her hair. “It’s the principle of the matter…This needs to be discussed and now it’s bigger than what occurred with me that one day,” she told the newspaper.

The case heads to mediation in February. If that fails, an adjudicator appointed by the Human Rights Tribunal will decide the outcome.

You’ll note that the shop did subsequently offer to provide a barber to cut McGregor’s hair but she rejected this. Furthermore, as one columnist in The Star points out: “Not 50 metres away from the Terminal Barber Shop is a unisex salon that offers basic haircuts to both men and women for 15 bucks.” Yet McGregor chose to ask for a haircut at a shop run by Muslims.

You can’t help wondering whether this was, just possibly, a conscious attempt to provoke a confrontation with the aim of promoting the Islamophobic stereotype of Muslims as backward misogynists who present a threat to western civilisation.

If that was McGregor’s intention, then she will be well satisfied with the result. The story, which originally appeared in the gay & lesbian magazine Xtra!, was splashed across the front page of theThe Star (which then published an editorial dismissing the controversy as a storm in a teacup). No doubt it will be seized on by raving anti-Muslim bigots across the blogosphere.