On Friday night, Ward 2 city council candidate Munira Abukar got a phone call from a supporter saying that some of her campaign signs had been kicked over and it looked like they had been vandalized. The signs were found on the corner of Martin Grove and Dixon Rds. in Etobicoke.

“We figured it was just general mischief,” she told the Star. “And then we turned over this one sign and saw an intentional and very hateful message.” The message read “go back home,” and Abukar’s face had been scribbled out in red marker. Someone had crossed off her name and written “b—-”

At about 2:30 p.m. Sunday, Abukar reported the incident to the police.

Abukar said she was “disappointed and shocked” when she first read the message, but it was her parent’s reaction that upset her the most. Her mother is a refugee and her father an immigrant, and both experienced racism when they first arrived in Canada. “To see the heartbreak on your parent’s face … It’s hard to want to protect your child and not be able to.”

Abukar isn’t very concerned about finding the person responsible for the hateful messages. Instead, she wants to create an opportunity for the city to discuss racism. “I think we need to understand that there is an underlying racism in our city, and there are people who believe that just because you look different that you aren’t from Toronto.”

The response on social media has been mostly positive, Abukar said. Mayoral candidate Olivia Chow tweeted her support on Saturday, writing that “there is no place for racism in this city.”

Chow has also been the target of racist and sexist remarks throughout the campaign period. At a debate on Oct. 1, a man questioned her ability to run for municipal politics, citing her immigrant status. On various occasions, she has been told to go back to China and to learn to speak English.

Abukar says she has witnessed many instances of racism, homophobia, and xenophobia during the Toronto election campaign, and says it is the responsibility of everyone running for office – “not just of people who have witnessed it like myself” – to speak out and keep people accountable. 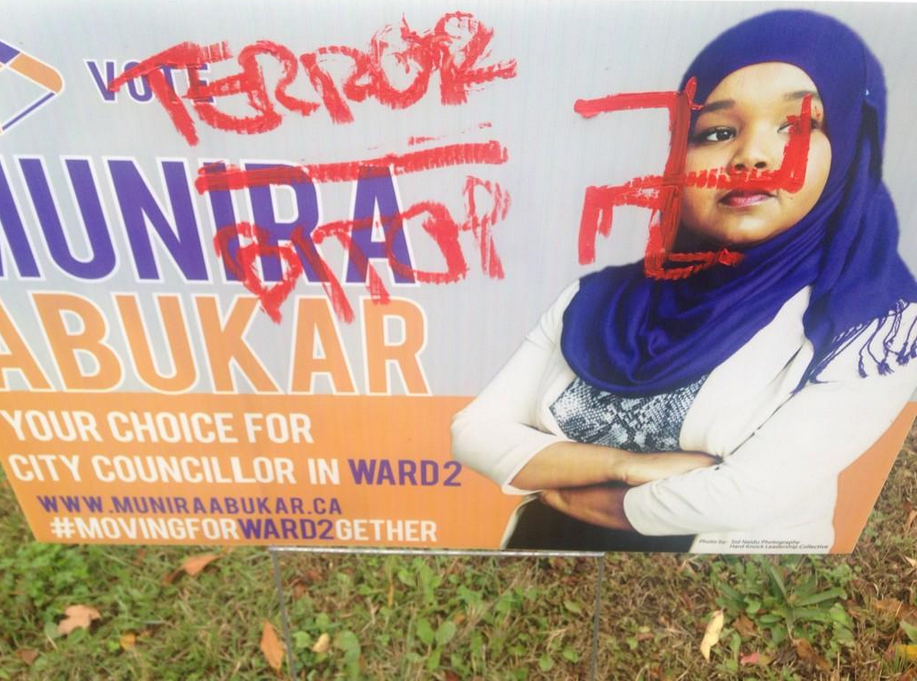