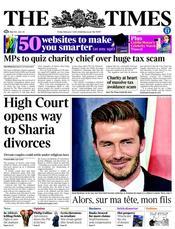 Yesterday the Jewish Chronicle carried a report (“Jewish divorce ruled OK in landmark High Court decision”) of a decision by a High Court judge to refer a Jewish divorce case to a Beth Din (rabbinical court) for arbitration, at the request of the couple involved in the divorce.

Here, you might think, would be an opportunity for some responsible reporting in the mainstream press on the subject of religious courts, showing how they can play a legitimate role in civil cases and countering the ignorant bigotry commonly displayed over the issue of sharia councils.

Of course, a responsible press is precisely what the UK lacks. Instead, we have newspapers ever eager to promote an “Islamification of Britain” narrative. So it’s no surprise that the story has made the front page of today’s Times under the headline “High Court opens way to Sharia divorces”.

The actual report, by the paper’s legal editor Frances Gibb, is in fact reasonably balanced, and avoids the sharia hysteria suggested by the headline. Many people, however, won’t see past that headline – or will take their cue from the version of the Times report published by the Mail, which has provoked the usual spate of Islamophobic raving from readers.

“Won’t be long before people will be having their hands chopped off for theft. And stoning for adultery, and hanging from the end of a crane for robbery.”

“Yet another nail in GB’s coffin,if this judge finds himself incapable of judging according to English secular laws he should hand in his wig.”

“NO NO NO to SHaria Law. This is GB so OUR LAWS ONLY. If people want Sharia Law they are welcome to go to a Country that supposts it. NOT OURS.”

“Another thin end of the wedge, what British way will be undermined next??”

“I rake it that the mediaeval punishments will also be acceptable?”

“We are heading down the WRONG pathway. After this precedent, things can only get worse – and I thought this was a Christian country.”

“Is it april fools day already!!!! If sharia is in this country then we the majority have to have our say and not allow this in to a majority christian country.”

“We always laughed at France as being the nation which surrendered quicker than any other. Britain has now taken over that position.”

“For all those who scoffed at the idea, who deny that Britain is changing at a dangerous pace, who stick their heads in the sand, wake up its all coming to get you……we are now on the slippery slope to end of Britain as we know it!”

“Sharia law here ? i knew it, let enough in and you will get their Laws too.”

“Anyone wanting to live under Sharia law should move to a country that has been subject to it, I suggest Mali for instance. Any takers, no? Didn’t think so !!!”

“Just wait till your fingers are cut off and your hand is hacked off or your stoned ot death… God no not in this Country surely?”

“What a load of rubbish, this is making way for the muslims to get what they want.”

“Our sons and daughters are dying in a third world hell whole fighting the taliban and the barbarity of Sharia law. And judges in the UK give it the rubber stamp.”

“You let this precedence in at your peril, just another step on the road to civil war I think. It’s already started with the religious nutters proclaiming round the streets of major cities that areas are ‘Muslim’ areas and therefore subject to sharia law.”

“Another nail in the coffin of western culture.”

To be fair, there are a few comments that attempt to introduce an element of rationality into the discussion:

“Why does the Mail emphasise Sharia law when this was a ruling about a jewish couple? Is this some kind of subtle bigotry comment against muslims when it hasn’t involved muslims at all? And then the Mail wonders why there are attacks against muslims. Disgraceful and shameful.”

“How absolutely typical. This is entirely about a Jewish couple acting under Jewish law and yet it’s used as an excuse for scaremongering about Sharia. Pathetic!”

“And how many read the bit saying that they could go with the ruling of the Beth Din because the outcome was not contrary to English law. So if the Beth Din or Sharia ruling was not in accordance with English law them the British court decision would overrule the religious court.”